The endometrial stromal nodule (ESN) is the rarest subtype of endometrial stromal tumors (ESTs) that’s why experience with ESN is limited. ESN could mimic highly cellular leiomyomas, usually seen in the premenopausal age. Patients present with non-specific symptoms such as abnormal bleeding, lower abdominal pain, or maybe asymptomatic. Our patient was 46 years old women suffering from abnormal uterine bleeding and lower abdominal pain and had no desire to protect fertility. The preoperative di...

Placental site nodule is an uncommon, benign, generally asymptomatic lesion of trophoblastic origin, which may often be detected several months to years after the tenancy from which it resulted. PSN usually presents as menorrhagia, intermenstrual bleeding or an abnormal pap smear. PSN is benign, but it is important to distinguish it from the other benign and malignant lesions like decidua, placental polyp, exaggerated placental site and placental site trophoblastic tumor and squamous cell carcin...

A Rare Case of Ovarian Tumor

Ovarian cancer is the third most common cancer in Indian women, accounting for 3% of all malignancies and 6% of deaths from cancer. It is fifth most common cause of death from malignancy in women. Ovarian cancer is associated with low parity and infertility. Because parity is inversely related to the risk of ovarian cancer, having at least one child is protective for the disease, with a risk reduction of 0.3 to 0.4. This case is presented to highlight the varied presentation of ovarian masses an...

Incarceration of the gravid uterus (IGU) poses significant risk for maternal and fetal complications during pregnancy. Several risk factors have been implicated in the development of an incarceration of the gravid uterus; however, the association between IGU and the Ehlers-Danlos syndromes (EDS) has not been reported. A 28-year-old female at 24 weeks gestational age presented with concern for preterm labor. IGU was diagnosed and she underwent surgical reduction of the incarceration via midline l...

A Multidisciplinary Approach to the Patient with Deep Infiltrating Endometriosis

Endometriosis is a prevalent condition that affects women’s health-related quality of life worldwide and deep infiltrating endometriosis represents a subset of these patients who are most severely affected. Due to the complex nature of deep infiltrating endometriosis (DIE) a preoperative suspicion for the condition allows for coordination of a multidisciplinary approach to surgical planning, a key to successful surgical resection. We describe three patient cases to highlight the importance of ...

Type 3 Transformation Zone of the Cervix and Risk of Missed Lesions during Cervical Cancer Screening with Visual Methods: A Case Report from Cameroon

Type 3 transformation zone (TZ) of the cervix poses a challenge in cervical cancer screening with visual techniques because of the potential for missing important precancerous lesions. This paper presents two case reports of women with Type 3 TZs who were screened with visual methods at the Cameroon Baptist Convention Health Services, had reassuring screening results, but presented soon after with invasive cervical cancer (ICC)....

Guillain-Barre syndrome (GBS) is a rare immune mediated polyradiculoneuropathy, causing muscle weakness, hyporeflexia and dysesthesia. There is no specific guideline for management of GBS during pregnancy in general and first term in particular. We report a 26-year-old nullipara who developed GBS in early pregnancy and present an overview of recommended treatment, maternal and fetal outcomes and pathogens associated with GBS in women diagnosed in first trimester pregnancy. We performed a systema... 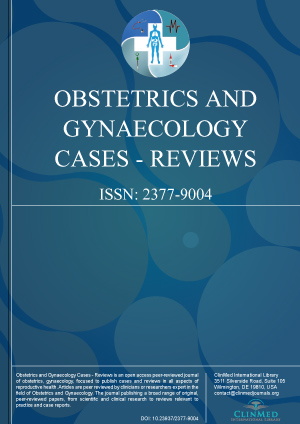