Gastroesophageal junction adenocarcinoma (AJEG) is a neoplasm that is globally prevalent with generally bad clinical outcome [1]. It is estimated that there is an annual incidence of new tumors in the order of 572,034 in the US with about 28,000 new cases and 10,960 deaths attributable to the disease [2,3]. In Brazil, an estimated 11390 new cases, corresponding to 8690 in men and 2077 in women for the year 2020 [4]. About half of the people with cancer of the esophagus or the gastroesophageal junction have metastatic disease at diagnosis, and there are few effective options after the progression of second-line chemotherapy [5,6]. Thus, surgery with or without adjuvant or neoadjuvant therapy is the treatment of choice for resectable cases with curative intent [7]. However, in inoperable cases, the conduit to be held is isolated chemotherapy or combined neoadjuvant chemotherapy associated with radiotherapy and is based on Cisplatin, Fluorouracil, Docetaxel, Epirubicin, Irinotecan, Fluoretaacin, Methotrexate, Epirubicin, and Capecitabine [8]. However, some patients do not respond effectively to these procedures. Thus, we adopted a second-line therapy using a targeted approach with immunotherapy based on immunohistochemical tests. Immune checkpoint blocking is a promising treatment strategy for certain cases of advanced cancer, and the immunotherapy strategies that had been used in patients with melanoma, non-small cell lung cancer and urothelial cancer were tested in patients with AJEG [9]. As a result, Pembrolizumab, a programmed cell death protein 1 (PD-1) inhibitor, has recently been approved for metastatic or recurrent JEG that has progressed beyond the second line of systemic therapy and has been used effectively in the present case report [6]. Therefore, it is necessary to find new options for these patients due to high mortality in view of the limitations of first-line treatments.

A 72-year-old woman in June 2015 was diagnosed with AJEG G2 (Figure 1 and Figure 2). The oncologist suggested a neoadjuvant chemotherapy scheme with Capecitabine, Oxaliplatin, and Epirubicin (EOX). However, this was not approved because of the cardiotoxicity of Epirubicin since the patient had coronary artery disease and a stent installed. Therefore, neoadjuvant chemotherapy was administered with only Capecitabine plus Oxaliplatin. Unfortunately, she had a severe infusion reaction with edema of the glottis during the second application of Oxaliplatin, preventing its further use. This was then followed by therapy with Capecitabine alone, because of which the patient developed extensive gastrointestinal toxicity requiring prolonged hospitalization, experienced significant weight loss (20 kg in 33 days) and underwent a gastrostomy. We chose to stop the neoadjuvant chemotherapy, and during the months of recovery, she had progression of local disease. In November 2015, the patient underwent gastroesophagectomy (total esophagectomy with extensive gastrectomy and creation of a neoesophagus with great gastric curvature) with an uneventful postoperative period. She had six months without any cancer treatment. In May 2016, a positron-emission tomography and computed tomography (PET-CT) performed on the patient identified nodal, liver, and peritoneal progression and prompted an examination with Personna® Onco, a genetic analysis tool that uses sequencing technology for analysis of multigenic next-generation sequencing (NGS). This examination discarded HER-2 changes and identified the PI3Kca mutation.

In June 2016, a new weekly chemotherapy regimen with Paclitaxel was begun. After 3 cycles, a PET-CT performed in January 2017 to evaluate response to treatment, found increased lymph nodes and liver subcapsular nodules in segment VI, suggesting progressing disease (PD) compared to the PET-CT in September 2016. Treatment with isolated Ramucirumab was started. In March 2017, Magnetic Resonance Imaging (MRI) showed progressive worsening nodal and liver PD (Figure 3 and Figure 4). Without the expected response to Ramucirumab, in May 2017, we changed the treatment line to Irinotecan alone. A PET-CT performed in June 2017 showed a favorable tumor response; however, partial treatment was instituted (dimensions of increased peritoneal thickening in iliac fossa were related to the increase in necrotic component and not to disease progression). Once isolated, the patient continued Irinotecan for 10 biweekly applications. In September 2017, an MRI revealed a liver nodule in the caudal aspect of segment IV with hypermetabolism signals, infectious and inflammatory changes involving the gallbladder and the liver parenchyma, and increased volume of the right ovary, which had a heterogeneous appearance. After 10 days, ultrasonography showed signs of cholecystitis and compression of the cystic duct by the hepatic hilum lymph node. During this period, the patient underwent microsatellite instability testing noting high instability (favorably to treatment with immunotherapy - being suggested for Pembrolizumab use). However, because immunotherapy treatment can only be initiated in the absence of inflammatory processes, a cholecystectomy was required. While awaiting surgery, the patient developed jaundice. Therefore, prosthesis installation was required in the common bile duct by Endoscopic Retrograde Cholangiopancreatography (ERCP), and during the procedure, we opted for permanent metal prosthesis. In September 2017, the patient underwent a cholecystectomy.

Figure 4: PET-CT in 2017 demonstrating liver nodular lesion in a study carried out immediately before the use of Pembrolizumab suggestive of a secondary implant and in the left at the same level, no longer showing the lesion after using Pembrolizumab, suggestive of complete regression in 2018. View Figure 4

In October 2017, after an uneventful postoperative period, the first cycle of immunotherapy was administered with Pembrolizumab 200 mg every 3 weeks. The patient remained in this regimen until revaluation in February 2018 without any relevant side effects. A PET-CT performed in February 2018 demonstrated a set of evolutionary findings suggesting favorable tumor response to treatment. A comparative analysis with the previous PET-CT in September 2017 had not more showed/shown lymphadenopathy in the porto-caval region and not revealed a significant increase of the radiotracer in peritoneal findings and a decrease in attenuation coefficients, suggesting a predominance of the necrotic component (adnexal right, just a capsular in liver segment VI, the hepatic hilum, the mesentery at the level of the right iliac fossa, left pre-sacral, and sigmoid handle inseparable). Thus, it was established that there was a favorable response by the drug.

Due to an excellent therapeutic response, the patient was maintained on Pembrolizumab every 3 weeks for another 4 months. A PET-CT in July 2018 not showed the small nodular lesion in liver segment VIII on a comparative analysis with the study from February 2018 and continues ever since (Figure 4).

The immune system has been considered a key factor responsible for monitoring and combating malignant tumors [10,11]. Malignant cells often have genetic and/or epigenetic alterations that can lead to the synthesis of neoantigens recognizable as "non-self" by the host immune system [12].

The manipulation of the immune system through immunotherapy is possibly a paradigm shift in cancer therapy. For this to be effective, one must consider both components of an immune response to an action on immune effector cytotoxic as the action on the mechanisms of tolerance. The knowledge that the immunological status is different for each tumor is a prerequisite for proposing appropriate immune therapies [13,14].

In 2015, Pembrolizumab (Keytruda®, MK3475), humanized immunoglobulin G4(IgG4), was approved for treatment of refractory melanoma by the Food and Drug Administration (FDA) and the European Medicines Agency (EMA) [15]. More recently, Pembrolizumab was approved by the FDA, EMA, and the Japanese Pharmaceuticals and Medical Devices Agency to treat patients with high levels of programmed death-ligand 1 (PD-L1) (≥ 50%) without chemotherapy expression and non-small cell lung cancer, without the EGFR mutation or rearrangement of ALK, due to efficacy in patients with tumors with high PD-L1 expression [16].

This drug is one humanized IgG4 antibody isotype that blocks a protective mechanism of cancer cells and allows the immune system to destroy these cancer cells. It targets the PD-1 receptor located on lymphocytes. This receiver, which is typically responsible for preventing the immune system from attacking the body's own tissues, is recognized as immune checkpoint [17,18]. The PD-1 is a transmembrane regulatory protein found on the surface of the effector cells of the immune system, such as activated T-cells, B-cells, and myeloid cells, to modulate their activation or inhibition. Under physiological conditions, the interaction between PD-L1 and PD-1 promotes the regulation of the immune response down resulting in negative feedback inhibitory counter [19,20]. However, patients who present with high microsatellite instability (MSI-H) have incompatible repair deficient tumors (MMRD), which are highly infiltrated tumors. In this group of individuals, a large number of cytotoxic activated CD8-positive T-cells and checkpoints regulated with PD-1 and/or PD-L1 are found [8,9]. Thus, when expressed on the surface of tumor cells, PD-L1 ligand allows avoidance of immune response to the tumor [21] leading to a depletion of cytotoxic T-lymphocytes that can remain in a state of anergy [22] damaging the immune system's ability to combat malignant cells. Thus, when the PD-1 on the T-cell binds to the PD-L1 in the tumor cells, the T-cell is deactivated, allowing the cancer cell to avoid the immune attack. Therefore, Pembrolizumab aims to inhibit the complex PD-1/PD-L1 by binding to PD-1, allowing the T-cell to remain active and coordinate an attack. However, Wang, et al. speculate that patients with AJEG whose tumor has high levels of PD-L1 expression or with microsatellite instability may be more suitable for anti-PD-1/PD-L1 treatment [23].

Many cancers produce proteins that bind to PD-1, blocking the body's ability to inhibit cancer in isolation [16,17]. Inhibition of DP-1 in lymphocytes avoids this process, allowing the immune system to reach and destroy the cancerous cells [24]. Nevertheless, this same mechanism also allows the immune system to attack the body itself and checkpoint inhibitors, such as Pembrolizumab, resulting in immune dysfunction as a side effect of its use. Hypothyroidism (RR 7.73, 95% CI: 3.86-15.49, p < 0.001); hyperthyroidism (RR 5.09, 95% CI 2.36-10.97, p < 0.001), uveitis and "dry eye", diarrhea, colitis or hepatitis [18,25-27] are the main side effects of this drug.

Finally, the patient with microsatellite instability was heavily pretreated with chemotherapy and second-line therapy, not obtaining the desired result, like most patients with AJEG. This results in a high mortality rate with limited treatment options and poor prognosis. The current results suggest that pembrolizumab offers a new and promising treatment option for the subgroup of patients with high microsatellite instability [28]. However, more randomized clinical studies and large trials are needed to confirm our findings especially in these sub-patients.

- Gastroesophageal junction adenocarcinoma (AJEG) is a neoplasm that is globally prevalent with generally bad clinical outcome.

- There are limited treatment options and poor prognosis for these patients.

- Pembrolizumab, a programmed cell death protein 1 (PD-1) inhibitor, has recently been approved for metastatic or recurrent JEG that has progressed beyond the second line of systemic therapy to the subgroup of patients with high microsatellite instability.

- Pembrolizumab was effective in a heavily-pretreated patient with high microsatellite instability.

The authors have no relevant affiliations or financial involvement with any organization or entity with a financial interest in or financial conflict with the subject matter or materials discussed in the manuscript. This includes employment, consultancies, honoraria, stock owner ship or options, expert testimony, grants or patents received or pending, or royalties. No writing assistance was utilized in the production of this manuscript.

The authors state that they have obtained verbal and written informed consent from the patient/patients for the inclusion of their medical and treatment history within this case report. 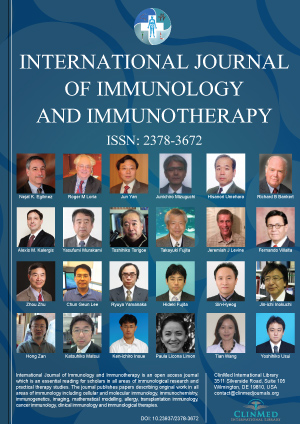 © 2020 Ferreira CGM, et al. This is an open-access article distributed under the terms of the Creative Commons Attribution License, which permits unrestricted use, distribution, and reproduction in any medium, provided the original author and source are credited.