A Smartphone is a portable device that could be capable of various tasks on different occasions. With many powerful functions, smartphones permeate into our everyday lives at an astonishing pace. Surely, the smartphone could make our lives much more convenient, but it could also bring quite a few issues, especially when it is used improperly. Nowadays, smartphone addiction is not a novel construct any more. It could be defined as an inability to regulate one's use of the smartphone, which eventu...

In Japan, a one-year compulsory postgraduate dental training program was started in April 2006. The aim of this training is to supplement the lack of clinical training in the undergraduate curriculum and to meet social requirements. New-entry dentists, who are called trainee dentists, have had their working conditions greatly improved, and are consequently able to concentrate on their clinical training. Trainee dentists must be paid reasonably and their work hours are limited to 40 hours a week ...

Internet addiction (IA) is the most studied behavioral addiction. However, few studies have been conducted that simultaneously include several countries to attain an inter-cultural and international perspective on the phenomenon. The aim of this systematic review is to observe the characteristics of cross-cultural IA studies, in order to explore (i) their classification, (ii) the cultures involved, (iii) the IA issues treated, and (iv) the commonalities and differences among cultures. For this r...

Chocolate is recognized as a type of food that contains many psychoactive components. Many studies have shown that some people may present compulsive symptoms such as the difficulty in resisting the urge to consume chocolate. On the other hand, there is evidence that omega 3 deficiency results in a dopaminergic hypofunctioning of the mesocortical and mesolimbic pathways related to reinforcing effects. Therefore, the objective of this study was to determine the effects of flaxseed oil (rich in om...

Cyberaddictions and Gambling Addiction: A Reflection on Social Markers and Paths of Intervention

The concept of cyberaddiction is far from being unanimously accepted by scientists. The same is true of addiction to videogames or to Facebook. While certain researchers wished to see this condition included in the DSM-5, others question the operational and practical basis for the diagnostic criteria. Some see cyberaddiction as a problem linked more to time management, to brain deficits, to an impulse-control disorder or to psychosocial conditions while others consider it to be a pre-existing co...

The Impact of Respondent Type on Treatment Facility Performance Evaluations - Do Alumni and their Friends and Family Prioritize different Offerings?

Objective: The primary objective of this investigation is to determine if alumni prioritize aspects of addiction treatment in facility performance reviews differently than loved ones (i.e. friends and/or family) of treatment alumni. Design: Alumni of addiction treatment facilities and friends and/or family members of alumni were queried through an online survey, which contained open-ended questions asking the respondents to identify their respective facility's strengths and weaknesses....

The following article reviews the literature on ethical issues surrounding in-patient treatment of adolescents with substance use disorders. Ethical issues surrounding confidentiality, informed consent, competency, multiple relationships and boundaries, working on a multi-disciplinary team, responsible caring, and termination of services are discussed. There is a gap in the literature regarding the ethical issues associated with this specific population; however, given the sensitive nature of th...

Alcohol withdrawal syndrome (AWS) is a complex phenomenon that involves several neurotransmission systems. Its signs and symptoms are related to the adrenergic autonomic hyperstimulation and to the hypofunction of the gabaergic system. Moreover, alcohol is an antagonist of the NMDA (N-Methyl-D-Aspartate) receptors, which are excitatory, in the central nervous system.... 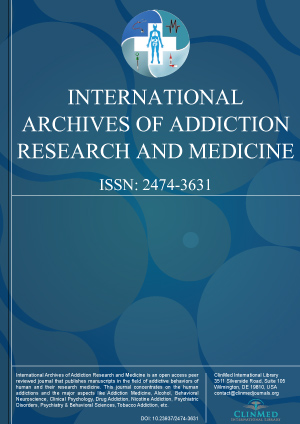