Metastatic Cardiac Tumor from Precursor B Cell Lymphoblastic Lymphoma with a Mediastinal Mass: A Case Report of a 12-Years-Old African Girl

Cardiac involvement in metastatic tumors is not widely investigated. Commonest site of cardiac involvement is the pericardium. However, diffuse metastasis to the myocardium and endocardium is uncommon. Striated cardiac muscle, fast blood flow within the heart and unique lymphatic drainage make malignant metastasis to the heart rare. Cardiac metastasis is a late manifestation of malignancy and most of the cases are diagnosed on Post-mortem. We describe a case of metastatic Pre B-Lymphoblastic Lym...

A total of 578 hypertensive patients were taken from cardiac follow-up. Among the hypertensive patients the magnitude of cardiovascular risk factors was 212 (36.7%). The magnitude of each cardiovascular risk factor was high. Magnitude of overweight and obesity was 33.7%. Concurrently 30.4% had habit of taking high salt diet and 27.3% were patients with dyslipidaemia. Patients with less physically active were 89.1% and 23.5% were consuming alcohol regularly. Whereas 15.9% was smoker. This study a...

Central venous catheters are commonly used in clinical practice. Right atrial thrombosis is a relatively common complication associated with indwelling catheter use. Thrombosis can be in different locations and forms within vascular and intracardiac structures. Echocardiographic images may mimic some anatomic and pathologic variants. We describe a case of a two-months-old girl with a thrombus which cor triatriatum dexter-like appearance in the right atrium due to the central venous catheter....

Effects of Morning versus Evening Administration of Perindopril on the Circadian Control of Blood Pressure in Cameroonian Type 2 Diabetes Individuals: A Crossover Randomized Trial

Renin-angiotensin system antagonists are the mainstays of blood pressure (BP) lowering strategies in people with diabetes. Perindopril a long half-life Angiotensin Converting Enzyme (ACE) inhibitor offers the advantage of a single daily dose, usually empirically taken in the morning. We therefore aimed to assess the influence of time of administration on the effect of Perindopril on circadian BP in type 2 diabetes (T2D) individuals with previously untreated stage 1 hypertension. Twenty T2D patie... 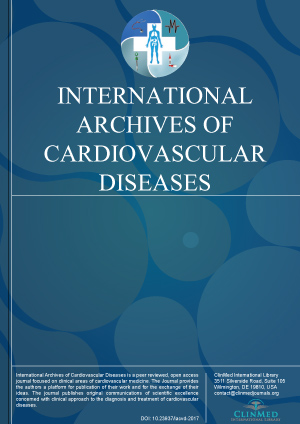