Challenges in mandibular bony defect reconstruction still exist. The use of compacted autogenous particulate corticocancellous bone, together with a human humerus allograft presents an exciting opportunity to simplify the reconstruction of such defects. This is especially the case when the surgery may be done in one stage via an intra-oral approach. We present a case where all of the above have been incorporated for the reconstruction of the mandible....

The Use of Allogenic Human Demineralised Humerus as a Mandibular Reconstructive Conduit: A Novel Technique

Reconstructing mandibular defects after trauma or ablative surgery is reliably done with compressed autogenous cortical and cancellous particulate bone. We present the use of a demineralised allogenic humerus shaft as a conduit for the autogenous particulate bone. This technique simplifies surgery, is less morbid for the patient, the graft also resembles the remaining native mandible and reduces overall treatment cost for such patients....

Surgical coverage of mandibular lingual recession is not a routinely implemented treatment procedure because of its lack of esthetic significance, which is one of the most common indications for recession coverage. A gold standard for recession coverage, the sub epithelial connective graft is used in conjunction with a novel modification of the tunneling technique to treat the lingual recession on mandibular anterior teeth....

Cystic lesions of the minor salivary glands are very common. These lesions are referred to clinically and collectively as mucoceles and can be of either the extravasation or the retention type. Intraoral retention phenomenon is quite common but the presence of retention cyst extraorally mimicking as midcheek mass is rare. These lesions often arise from the salivary glands, but can also originate from the muscles, buccal fat pad, or other structures. We report a case of 40-year-old female present...

Thirty-six female adult Wistar albino rats divided into three groups according to the number of corticosteroid injection, each group has two subgroups according to the time of scarification either after one week or two weeks after the last injection. The most affected structure of the temporomandibular joint is condylar head and temporal bone, followed by hyaline cartilage and the fibrous layer. The articular disc and retro-discal tissue are the last structure to be affected with intra-articula...

Bone giant-cell granuloma (GCG) is a rare non-neoplastic lesion. Hypoxia induces drug resistance in clinical tumors. The concept between drug resistance and apoptosis has been well defined but the relationship between reduced oxygen species and apoptosis is not a one-way story. Therefore, this study is an attempt to investigate the anti-apoptotic role of Bcl2 gene and Bcl2 protein in the hypoxia induced chemo-resistance of aggressive GCG. Forty cases of buffered formalin-fixed, paraffin embedded...

The Treatment of Lymphangioma in the Buccal Mucosa by Surgical Excision: A Rare Case Report

Lymphangiomas are benign hamartomatous tumors which are characterized by abnormal proliferation of lymphatic vessels. They are lymphatic malformations which are localized to head and neck region. They are rare located in the oral cavity. Tounge, lips, buccal mucosa, soft palate and floor of the mouth are affected in the oral cavity. However buccal mucosa is infrequent in litarature. In this report report, a rare case of lymphangioma of the left buccal mucosa of retromlar area in a 30-year-old fe...

Ameloblastomas are benign, locally invasive, polymorphic neoplasms that consist of proliferating odontogenic epithelium (usually of a follicular or plexiform pattern) lying in a fibrous stroma. They are known to have a high recurrence rate and are sometimes managed aggressively with radical surgery which usually involves wide resections and free flap reconstruction. Here we present a case report illustrating that certain variants of ameloblastomas have less likelihood of recurrence hence conserv...

Temporomandibular joint (TMJ) disorders are under-diagnosed in pediatric patients, and infantile TMJ luxation is a very rare condition. Luxation early in life can cause skletofacial problems, such as retrognathia, if it is left untreated for a long time. It is well known that severe retrognathia is one of the most common causes of sleep-disordered breathing (SDB). The authors report a case of infantile TMJ luxation with secondary retrognathia associated with SDB, in which intraoral vertico-sagit...

Tumors of salivary glands constitute 3% of neoplasms of the body. Clinical signs and symptoms usually occur in tumors at advance stages. Dynamic-contrast-enhanced and diffusion-weighted MR sequences have been described as useful diagnostic tools in other locations. Our goal is to evaluate the utility of these techniques for parotid tumors. We retrospectively reviewed the Parotid tumors operated by our department whit Dynamic-contrast-enhanced and diffusion-weighted MR sequences between 2012 and ...

Myofascial Pain Dysfunction (MPD) is a regional muscular pain characterized by the presence of trigger points (TrPs), which are painful points cause referred pain when stimulated. There are many treatment modalities for MPD. However, no treatment has proved its superiority over the others yet. To figure out what is the most effective treatment in relieving pain in patients with myofascial pain dysfunction (MPD) among local anesthesia, botox and trigger point dry needling....

Efficacy of Platelet-Rich Fibrin in Bone Regeneration of the Jaws: A Systematic Review

There are two categories or generations of autologous platelets concentrate (APC). The first generation or gels rich in growth factors (GFs) are obtained using anticoagulants and require subsequent platelet activation through the addition of thrombin or calcium chloride. In this group is the platelet-rich plasma (PRP)....

Metastases in oral cavity possesses a low frequency. They represent approximately 1% of malignant process in mouth, being the mandible the most prevalent and in an even smaller number it affects the temporomandibular joint. We present a 72-year-old male gender patient, who asks for temporomandibular pain initially interpreted as a temporomandibular disorder; after radiographic control an osteolytic lesion is identified in the right mandibular condyle for which is derived to the Maxillofacial Sur...

The Timing of Instructions Given to Patients Subjected to Third Molar Removal: Effect on Memory and Pain

The objective of this study was to assess whether patient instructions for the post-operative period are best remembered when given well before, just before or after surgical removal of a third molar. Also, the effect of preoperative anxiety on memory and pain was evaluated. A total of 105 patients were included. Baseline anxiety levels were assessed by a questionnaire. Next, patients were assigned to one of three groups in which the instructions for the postoperative period were given verbally ...

Odontogenic myxoma (OM) is a benign, locally invasive and aggressive, non-metastasizing neoplasm of the jaw bones. This article presents a rare case of odontogenic myxoma occurring in the maxilla of a 42-year-old female patient with review of the literature emphasizing a huge controversy regarding the surgical management.... 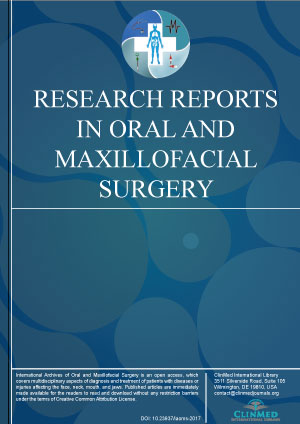