Urban ambient air pollution is identified as a risk factor for cardiovascular and respiratory morbidity and mortality. There is growing evidence suggesting associations between air pollution and a wide range of additional negative health conditions. The existing literature supports the association between exposure to ambient air pollutants and brain health. Among such reported effects are increased incidence of neurological and psychiatric disorders including cognitive decline, anxiety, depressi...

Mindfulness Based Cognitive Therapy for Substance Abuse and Depression: A Case Study

Mindfulness is increasingly conceptualized in terms of its regulatory function with research suggesting that mindfulness may have a constructive effect on psychological well-being. A systematic review of the few existing MBCT randomized controlled trials concluded that MBCT has an additive benefit to usual care in preventing depressive relapse for individuals with three or more previous depressive episodes. Mindfulness is an effective tool which help people with addiction because it is a simple ...

Population Drinking and Gender Gap in Tuberculosis Mortality in Russia

Tuberculosis is one of the leading causes of mortality from infectious diseases in many countries. To date, there has not been a satisfactory explanation for the gender imbalance in the prevalence and mortality from tuberculosis. The gender differences in tuberculosis mortality in Russia are among the highest in the world....

Alcohol use disorder is a growing public health concern worldwide. Accurate assessment is an important step towards effective management of the patient suffering from alcohol use disorder. Self-report often lacks accuracy and may be misleading in a hesitant patient. The use of biochemical laboratory measures such as alcohol biomarkers, often helps in obtaining independent estimations of alcohol use. The traditional biomarkers (such as Aspartate Aminotransferase, Alanine Aminotransferase or Mean ...

Today tobacco is the common form used for smoking. Worldwide, tobacco consumption is estimated to kill 1,000 million in the 21st century. Persons with mental illness consume about 33% of the tobacco used and nearly 46 million adults with mental illness have a smoking rate 70 percent higher than those without. Admission to the hospital provides an excellent opportunity for patients to quit smoking. A good knowledge of the hazards of smoking and cessation intervention alone is not adequate for a n... 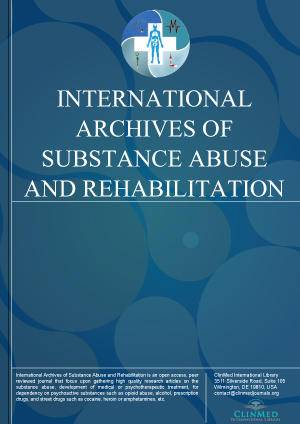