Charcot neuroarthropathy (CN) is a syndrome that was first described over 300 years ago. Sir William Musgrave was the first person to define neuropathic osteo-arthropathy in 1703 as an arthralgia whereby he described that syphilis was the supreme cause. 178 years later, Jean-Martin Charcot, (1825-1893) gave a thorough description on the condition in the year 1886. Consequently, the condition was named after him. Charcot defined the condition as a continuous, denervation-induced decadence of the ...

Herpes Zoster: An Atypical Cause of Foot Drop - Case Report and Review of the Literature

We report on an 81-year-old female who presented with acute, atraumatic right foot drop four weeks after developing herpes zoster in the ipsilateral L4 and L5 dermatomes treated with valacyclovir. Lumbar MRI revealed no explanatory abnormality, and the etiology of her right foot drop was presumed to be due to an outbreak of herpes zoster. After three months of physical therapy and bracing, her right lower extremity weakness greatly improved. We present a comprehensive literature review of atraum...

Even though fusion is the main form of treatment for end-stage osteoarthritis (OA) of the ankle, total ankle replacement (TAR) is increasingly being recognized as an effective alternative procedure, with favorable clinical results and improved quality of life. However, the results have been disappointing compared to those of hip and knee arthroplasty. In fact, the ankle is a more complex joint and its biomechanics and kinematics are strongly influenced by neighboring joints. The ankle joint comp...

Does the Screw Grip Affect the Outcome of Screw Fixation of Malleolar Fractures?

The study -which is the first clinical according to the literature- included 136 patients with surgical fractures of the ankle. Patients presenting any evident factors influencing porosis as well as open fractures were excluded. Fibula reduced anatomically and fixed by a 1/3 tubular plate placed laterally. Proximal screws had bicortical fixation grip strength while distal screws had only unicortical. Screws with a reduced fixation grip strength during insertion were left in place. Numbers were a...

Acute Achilles Tendon Rupture Associated with Medial Malleolar Fracture: Is it Still a Rare Injury? Case Report and Review of the Literature

A 57-year-old male with unremarkable previous medical history, presented to the emergency department after a motorcycle accident. He described having suffered a violent ankle dorsiflexion with external rotation as the mechanism of injury resulting with pain and functional impairment localized in the left calf and ankle. He was unable to bear weight after injury. Clinically, he had a palpable defect at the midpoint of the Achilles tendon and a positive Thompson test. In addition, the patient comp...

Subtalar joint ligament sprains are often missed in the setting of chronic inversion ankle injuries. This can lead to pain and instability of the subtalar joint. In many cases, without proper identification, the patient may eventually undergo an unnecessary subtalar joint fusion rather than a ligament reconstruction. Achilles, peroneus brevis, and gracilis tendon grafts have been described to repair subtalar ligament instability in the literature. To our knowledge, the use of exogenous ligament ...

Relationship between Toe Flexion Movement and Center of Pressure Position

In humans, the toes are important for stability while standing. We aim to elucidate the role of the toes in posture control by examining the relationship between the action of the flexor muscles and the center of pressure (COP) positions in the standing posture. The subjects were 16 healthy young adults who were free of musculoskeletal and neurological disorders. We measured the toe plantarflexion movements, COP positions, and floor reaction force components in the standing and forward loading ...

A shortened first metatarsophalangeal joint (MTPJ) fusion can be a debilitating complication of arthrodesis surgery. The most commonly accepted treatment is revision of the first MTPJ revisional arthrodesis with lengthening utilizing bone graft. To our knowledge, there is no published literature on first MTPJ short malunion correction using monorail distraction and arthroplasty with a silastic implant. A case is presented of a young active 32-year-old individual who presented to our office follo...

Congenital vertical talus is defined as a foot deformity in which the calcaneus is in equinus, the talus is plantarflexed, and there is a rigid and irreducible dislocation of the talonavicular joint complex, with the navicular articulating on the dorsolateral aspect of the talar neck. It is often associated with systemic involvement. To identify the most common anomalies accompanying to CVT (Congenital Vertical Talus). No literature investigating similar clinical data was found in the literature...

First Metatarsophalangeal Arthrodesis or Silastic Arthroplasty in the Management of End-Stage Hallux Rigidus: A Comparison of Outcomes Including Proms

Both first metatarsophalangeal arthrodesis and Swanson silastic arthroplasty are established treatments for the management of end-stage hallux rigidus; identifying the specific outcomes and complications associated with each can represent a challenge when consenting patients. PROMs data and clinical outcomes were compared for consecutive series of patients who had received either procedure as surgical management of end-stage hallux rigidus....

Novel Ways to Save the Foot in Malignant Melanoma

The incidence of malignant melanoma is increasing rapidly. Following clinical diagnosis, excisional biopsy is performed to confirm the diagnosis. Wide local excision down to the deep fascia must be performed in order to completely remove the melanoma. Large plantar soft tissue defects are often a consequence of resection for oncological purposes. In order to reconstruct the weight bearing sole of the foot, the tissue used must be resistant to weight, shear stress and pressure....

A number of surgical procedures for treating chronic ankle instability have been described. Most of them are only to repair the anterior talofibular ligament (ATL) without considering the calcaneofibular ligament (CFT) injury and both chondral injuries of talus and tibia. We aim to describe a modified procedure as an alternative to already described surgical techniques that offer some advantages that we have observed....

This study aimed to examine the influence of court surface on foot loading when executing typical basketball tasks. Thirteen male basketball players performed three basketball-related tasks: Layup, jump shot, and maximal effort sprint on wooden and asphalt courts. In-shoe plantar loading was recorded during the basketball movements and peak force (normalised to body weight) was extracted from eight-foot regions. Perceptions of discomfort at the ankle, knee, and back were surveyed using a 10-cm v...

A Comparative Prospective Study of Platelet Rich Plasma vs. Corticosteroid Injection in Plantar Fasciitis not Responding to 6 Weeks of Conservative Treatment

There are various modalities for the treatment of plantar fasciitis that include rest, orthotics, night splints, extracorporeal shockwave therapy and casting. If all conservative methods fail; a corticosteroid injection over the medial tuberosity of the calcaneum is an effective treatment modality. In recent years the use of Platelet Rich Plasma (PRP) a component of blood that is bioactive with a platelet concentration 2-5X the baseline platelet count of the patient.... 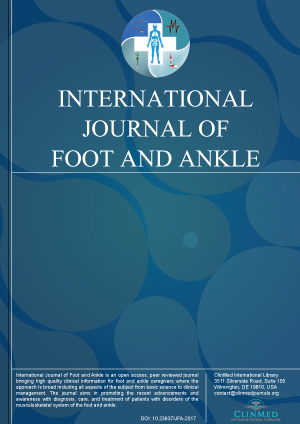