Tooth loss is a risk factor for dementia. This study aimed to compare the occlusal imbalances in cognitively impaired elderly patients to those with normal cognitive function. Dementia, as defined by the World Health Organization, is a syndrome that affects memory, thinking, behavior, and the ability to perform daily activities. Approximately 47.5 million people are affected by dementia worldwide, and this number is projected to double or triple by 2050. The two most common types of dementia are...

Anxiety has a great influence on the painful experience related to Temporomandibular Disorder (TMD), but the association between clusters of anxiety phenotypes and the subjective perception of signs and symptoms was few explored in the scientific literature. The aim of this study was to analyze the impact of anxiety level on the pain perception experience and fatigue of masticatory muscles in subjects with chronic TMD according to clusters of anxiety phenotypes....

Some Important Facts about the Periodontal Disease

The periodontal disease is the most common chronic inflammatory disease of microbial origin, which acts on the supporting tooth tissues, including the periodontal ligament and alveolar bone. The most common form of periodontal disease is the mild form of gingivitis, which is the precursor of periodontitis as the most severe disease in this group and is defined as the apical extension of gingival inflammation, affecting parodontium. The parodontium is a specialized connective tissue that surround...

Dental Caries in Geriatric Dentistry: An Update for Clinicians

Caries is a progressive infectious disease that, without treatment, leads to the destruction of the dental organ and can damage the surrounding tissues. According to the WHO, it is the third global scourge affecting all ages of life. Over the past 40 years, prevention campaigns for children and adolescents have led to a decline in the prevalence of caries. The CAOD index for children aged 6 to 12 years decreased from 4.20 in 1987 to 1.23 in 2006 and there is an increase in the number of children...

Constant care should be adopted for the treatment of patients hospitalized in Intensive Care Units (ICUs). It is necessary to cover the proper oral hygiene habit given to the interrelationship between oral and systemic diseases, in the development of nosocomial pneumonia. Considering these deficiencies and elucidated problematizations, the present study aimed to evaluate the oral hygiene protocols in patients hospitalized in the Intensive Care Unit. National and international protocols and studi...

Twenty patients who were referred to our clinics were selected for our study. These patients were randomly allocated to each of the two functional appliance groups. Of these, 10 were treated with Monoblock and the remaining 10 were treated with Twin Force appliances. The inclusion criteria were as follows: Class II division 1 malocclusion, retrognathic mandible, peak growth period, normal or low-angle growth pattern and increased overjet. Pre-treatment and posttreatment cephalograms were obtaine...

Repair versus Replacement: A Questionnaire Examining the Repair Preferences of Turkish Dentists in Dental Restorations

To investigate the preferences of Turkish dentists in repairing dental materials. 344 Turkish dentists participated the survey. The questionnaire consisted of 3 sections. In the first part demographic features were asked. The case was presented in the second part; How treatment plans change was asked in the cases such as partial loss of restoration, discoloration, loss of hard substance, secondary caries, marginal discoloration, and marginal gap. In the third part, the most frequently used mater... 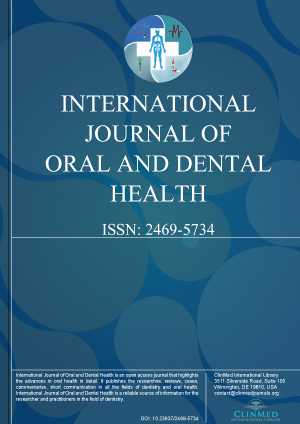