A pilot study was done to measure quantitative EEG (qEEG) brainwave frequencies and behavioral indices of five women undergoing chemotherapy treatment for cancer, before and after listening to specific music (The Magic Mirror-Inspired Reflections solo harp CD written, performed and recorded by Amy Camie) once a day for ten days. Following treatments, the EEG profile for all five participants improved and subjective reports from daily questionnaires confirmed a positive effect of the music....

Radiation exposure to the thyroid gland is unavoidable in breast cancer (BC) radiotherapy (RT). This study was conducted to evaluate the impact of using different supraclavicular (SCV) field angles on the percentage volume of the dose absorbed by the thyroid relative to the maximum dose absorbed by the spinal cord. A total of 50 consecutive BC patients undergoing planning computed tomography (CT) were evaluated. The thyroid gland, spinal cord, and SCV nodal volumes were contoured on the planning...

Despite of the high incidence of hepatocellular carcinoma (HCC), treatment strategies stays restrained. New treatment aspects remain a necessity to improve overall survival of patients. Here, we report for the first time a 2 years complete remission of hepatocellular carcinoma with pembrolizumab after failure of sorafenib and progression after liver transplantation. Immunotherapy became a field of interest in HCC for researchers and clinicians in order to establish new immunotherapy modalities t...

Having been identified for centuries, breast cancer still remains one of the leading causes of death in women. Within the United States of America (USA) alone, it is estimated that over 60,000 women would have developed new cases of malignant breast cancer in 2017 alone; thus, calling an attention for the development of a reliable and effective breast cancer model for drug discovery to combat the disease or diagnostics to predict the progression of the disease. Current breast cancer models invol... 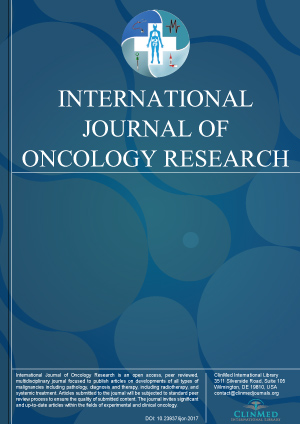