Portal hypertension can lead to life-threatening variceal bleeding (VB). Transjugular intrahepatic portosystemic shunt (TIPSS) is the standard choice for uncontrolled VB. Unavailable for TIPSS, we design a mesofemoral shunt (MFS) as an alternative method for control of VB. From March 2011 to November 2014, eleven patients with VB due to liver cirrhosis were enrolled. The MFS was created by connecting from superior mesenteric vein below transverse colon, via subcutaneous tunnel, to right femoral ...

Giant Brunner's Gland Adenoma - An Unusual Cause of Gastrointestinal Haemorrhage

Brunner's gland adenoma is a rare benign tumour of the duodenum. Less than 200 cases have been reported in the literature. Usually asymptomatic, these lesions rarely manifest as upper gastrointestinal haemorrhage or duodenal obstruction. We report a 40-year-old gentleman who presented with melaena and iron deficiency anaemia. Duodenoscopy revealed a large pedunculated tumour in the duodenal bulb. Due to the huge size, the patient underwent surgical polypectomy through laparotomy and duodenotomy....

In 1960, Shaftan, et al. recognized that mandatory laparotomy for penetrating abdominal injury (PAI) resulted in negative findings in approximately one-third of patients, with significant associated morbidity and mortality. This was underlined by a 37 percent negative laparotomy rate after mandatory laparotomy for truncal stab wounds. Superior critical care facilities, advances in interventional radiology and the increased availability of abdominal ultrasonography, focused abdominal sonography i...

Hypertrophic pyloric stenosis (HPS) is a disorder of infants that results in an abnormal thickening of the pyloric sphincter. Surgical division of the pyloric muscle fibers under general anesthesia is the standard treatment. There is currently no realistic simulation model of hypertrophic pyloric stenosis. Surgeons learn the procedure on live infants. Our objective was to determine if an adult embalmed cadaver pylorus, a readily available resource at most medical schools, could serve as a simula...

Hepcidin is an iron-regulating protein that also behaves as an acute-phase reactant during the inflammation process. The aim of the current research was to assess the efficiency and usability of serum hepcidin levels in determining the severity of intraabdominal inflammation, and to compare hepcidin with other acute phase reactants....

The Use of Platelet-Rich Fibrin Plugs in the Treatment of Perianal Fistula: Traditional Curettage vs. Debridement with a Graduated Set of Cylindrical Curettes

Perianal fistula is a common disorder that produces a strong negative impact on patients' quality of life. The aim of fistula surgery is to eradicate the fistula tract by closing the internal orifice and to do so without endangering continence. Simple open fistulotomy, which is commonly used for low fistulas, is often unsuitable for complex ones, as it bears a significant risk of impairing continence. Various procedures have been suggested for treating complex perianal fistulas, but none have ye...

Recto-Gluteal Fistula from Colonic Stent Migration and Perforation in a Patient with Metastatic Colorectal Cancer Treated with Folfox and Bevacizumab: A Case Report 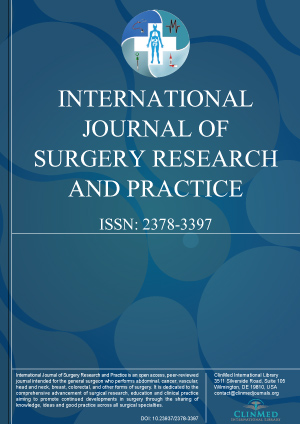