The Degree of Apoptosis in the Cytotrophoblast Regulates Amyloidosis Fate in the ER Stress of the Syncytiotrophoblast: Morphological Evidence

Recently preeclampsia (PE) has been linked throught molecular evidence to endoplasmic reticulum (ER) stress in the placenta. In this organ ER stress is generated due to placental oxidative stress as a consequence of malperfusion secondary to deficient spiral artery remodeling. Immunohistochemistry and ultrastructural analysis were used to study tissue specimens from 14 term placentas: 4 normal, 4 PE, 3 intrauterine growth restriction (IUGR), and 3 PE+IUGR....

Effects of Methotrexateonil-6alphar, VCAM-1 and NF Kappa B Expression in a Rat Model of Metabolic Syndrome

In recent years, there has been great interest in non-pharmacological methods to manage uncontrolled and resistant hypertension. Renal denervation and formation of a central iliac anastomosis are examples. In addition, renal denervation has yielded promising results in the prevention and treatment of AF. We have analysed the potential explanations for this in detail. A central iliac arteriovenous anastomosis, meanwhile, reduces arterial stiffness which is not targeted by sympathomodulation....

Intensive versus Standard Therapy for Hypertension: The Clinical Trials

Hypertension is the leading risk factor for premature death and disability. It can be controlled through lifestyle changes and use of antihypertensive medication. This review looks at intensive blood pressure reduction trials in non-diabetic, diabetic, and mixed patients' populations. The primary hypothesis for the Systolic Blood Pressure Intervention Trial (SPRINT) is that treating to a systolic blood pressure target of < 120 mmHg (the intensive intervention) compared to a systolic blood pressu...

Introduction: Aldosterone has been implicated in the pathophysiology of both metabolic syndrome (MS) and MS-associated arterial hypertension, despite the use of mineralocorticoid receptor antagonists in these scenarios has been little studied. Objectives: To assess the effects of mineralocorticoid blockade on blood pressure as well as metabolic and renal parameters in mild hypertensive subjects with MS compared with an active control group....

Advances in Low-Dimensional Mathematical Modeling of the Human Cardiovascular System

In the United States, young adults (18-39 year-olds) have the lowest hypertension control rates (35%) compared to middle-aged (58%) and older (54%) adults. Ambulatory care for hypertension management often focuses on medication with little time for self-management and behavioral counseling. This study was designed to evaluate the feasibility of MyHEART, a telephone-based health coach self-management intervention for young adults....

Refractory Arterial Hypertension (RAH) is characterized by persistently high blood pressure values. Angiotensin Converting Enzyme (ACE) inhibitors in combination with other antihypertensive drugs are effective for RAH and have good clinical tolerance. According to the literature, the adverse effect of cough in patients using ACE inhibitors occurs in 5 to 20% of them. However, in clinical practice, the incidence appears to be higher, making it difficult the therapeutic adherence.... 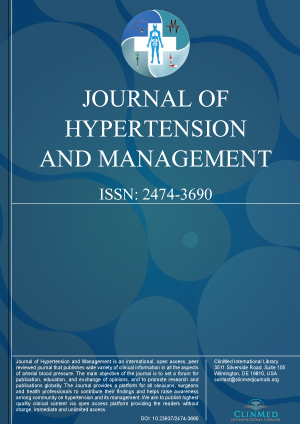