To evaluate the success rate of revision myringoplasty using temporalis fascia graft myringoplasty and to analyse the effect of potential influencing factors on closure of tympanic membrane (TM) and hearing outcome such as size of perforation (less or greater than 50% of tympanic membrane), site (anteriorly or posteriorly located) of perforation, whether the patient smokes or not, and condition of contralateral ear. Thirty patients were included in this prospective study, who underwent revision ...

Peripheral facial nerve palsy is mostly attributed to Bell’s palsy, however in 5-10% of cases it may be from an underlying malignancy. It can be difficult to distinguish initially, frequently leading to misdiagnosis and a delay in management, potentially compromising survival of these patients. A common distinguishing feature is that facial palsy from malignancy is typically gradual onset and progressive as opposed to sudden in that of Bell’s palsy, although other benign causes may also pres...

Hemangiopericytoma is an uncommon vascular tumor derived from the pericytes of Zimmermann, representing only a small proportion of head and neck tumors, and mostly occurring in the sinonasal tract. We report two cases of hemangiopericytoma of the sinonasal tract in a 78-year-old woman and a 77-yearold man, both presenting with symptoms of frequent epistaxis. In Case 1, a purple tumor was identified originating from the posterior olfactory fissure in the left nasal cavity. To reduce bleeding from... 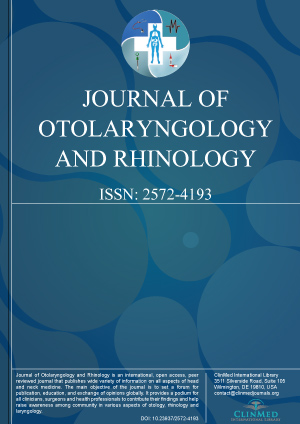