Infertility is the inability of a couple to achieve conception after one year of unprotected coitus. Today almost one in six couples face difficulty in conceiving (1). The rise in female infertility and the use of alternative systems in sharing the global burden of treating infertility has remarkably increased. Homoeopathy is often effective in curing infertility where conventional medicine either fails or is expensive or requires operative procedures and hormonal therapy with their added compli...

An estimated 15% of couples remain childless after one year of unprotected intercourse, which represents approximately 140 million people worldwide. Despite proper diagnostic work-up and as our knowledge of the events involved in normal conception is still limited, we fail to determine the cause of infertility in nearly half of these cases. Sometimes abnormalities are likely to be present, but are not detected by conventional approaches....

Sex disparity in anterior cruciate ligament injury is multifactorial. Sex hormones, such as relaxin, may play a role in the increased risk of injury in female athletes. In order to fully investigate this relationship, optimal strategies for capturing serum relaxin concentration across the menstrual cycle must be determined. The aim of this study was to describe the variability in the timing and magnitude of relaxin concentration changes across the menstrual cycle. ...

Models for predicting the success of labor induction can be used to improve clinical decision. The aim of this study was to create nomogram based on clinical, sonographic and biochemical parameters, to provide an individualized prediction of success of induction.... 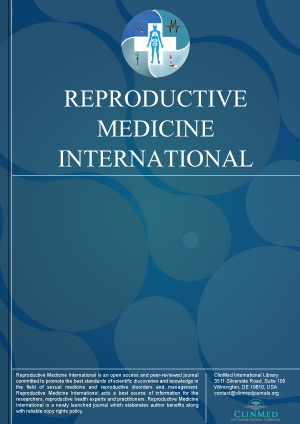