Severity and Outcomes of Neurologic Deficits Associated with Pyogenic Spondylodiscitis: A Systematic Review

Patients with advanced pyogenic spondylodiscitis can present with neurologic deficits, however, the prevalence, severity, and outcome of the neurologic deficits are not well known. A systematic review was performed to improve knowledge of this commonly encountered clinical scenario.

A comprehensive search of databases including PubMed, Science Direct and Google Scholar from 2000-2020 was performed. From 1478 articles, 75 were screened and 40 included. As the most commonly used classification for neurologic status was Frankel grading, we categorized the various neurologic findings corresponding to Frankel's descriptions. Results of treatment were expressed as complete recovery, partial recovery, unchanged, or deterioration.

Among 3197 patients with pyogenic spondylodiscitis, 1314 cases showed a variety of neurologic manifestation: 415 (32%) presented with subjective symptoms including radicular pain, sciatica or numbness, 899 (28%) were diagnosed with a significant neurologic deficit on initial presentation. Patients with Frankel A/B deficits (N = 286, 22%) had the lowest proportion with complete recovery (16%) and the highest proportion to remain unchanged after treatment (34%). Patients with Frankel C deficits (N = 333, 25%) were more likely to have complete recovery (29%), although the majority had only partial recovery (53%), or remained unchanged (16%). Patients with Frankel D deficits (N = 280, 21%) were the most likely to experience complete recovery (53%) with a similar number of patients exhibited partial (25%) or no recovery (20%). A small percentage (2%) of patients in each Frankel group deteriorated after treatment. The comparison of neurologic outcome in the non-surgically treated (n = 97) versus surgically treated (n = 449) patients revealed that surgical intervention was associated with improved neurologic recovery (R = - 0.205, p < 0.000).

Spondylodiscitis is the most common form of hematogenous osteomyelitis in patients aged > 50 years and represents 3%-5% of all cases of osteomyelitis [1]. Recently, the incidence of vertebral osteomyelitis has increased because of improved accuracy of diagnosis in addition to the rise in susceptible patients including diabetes mellitius, intravenous drug users, patients undergoing hemodialysis, and immune compromised hosts [2].

Neurological symptoms associated with spondylodiscitis have been reported with varying incidence, ranging from dysesthesia and radicular pain to complete paraplegia [3]. Previous studies have shown that neurological deficit s develop because of epidural abscesses or a pathological fracture. Furthermore, the severity of neurologic symptoms is correlated with delayed diagnosis, older age, virulence of the offending organism, and presence of co-morbidity. The purpose of this study is to report on the severity of neurologic impairment in spondylodiscitis patients and identify factors associated prognosis and neurologic recovery.

A comprehensive search of different databases including PubMed, MEDLINE, Science Direct and Google Scholar from 2000 to 2020, was performed. The searched keywords included "Vertebral Osteomyelitis" OR "Osteodiscitis" OR "Pyogenic Spondylodiscitis" AND "Neurologic Impairment" or "Neurologic Deficit". Manual search of reference lists from relevant papers and guidelines was performed.

Initially 1478 articles were collected and their abstracts were screened. Seventy-five articles were selected based on inclusion and exclusion criteria. After comprehensive review of full texts, 40 studies which contained detailed neurologic exams and were eligible for systematic review (Table 1).

The extracted data from each study consisted of number of patients, mean age, gender distribution, location of involved levels, period before appropriate treatment was instituted, presence of epidural abscess, neurologic status at presentation and at final follow up.

Data collection and analysis were performed using Microsoft Excel® 2010 and the statistical software was used. Data distribution was assessed and continuous variables were compared using unpaired t test, Wilcoxon rank sum test. A p value < 0.05 was considered statistically significant. To assess the correlations, the Fischer exact test was used. The neurologic outcome of the medically treated patients was compared with surgical group. Pooling of data within the subgroups was done using weighted averages based on the sample size.

Classification of neurologic manifestations and sequelae

The neurologic status and sequelae was expressed by various statements in the different articles. However, the most common applied classification for neurologic deficits was Frankel grading, which is similar to international standards for neurological classification of spinal cord injury (ISNCSCI) designed by the American Spinal Injury Associtation (ASIA) (Table 2).

As almost all the articles assessed neurologic outcomes retrospectively, the bias and limitation associated with retrospective analysis are also present in this study.

3236 patients with pyogenic spondylodiscitis were included with a mean age 60.3 years. There were 1,966 males (62%) out of 3,162 reporting gender data. There was a mean treatment delay of 56.24 days in 1828 cases with onset of symptoms prior to treatment initiation.

In addition, there was multi-level involvement in 513 (16%) of 3212 patients. The most common location of vertebral infection was lumbar and thoracolumbar spine (60%), followed by thoracic spine (27%), and then cervical spine (13%). The incidence of concomitant epidural abscess in the patients with neurologic deficit was 53% (1228 in 2331). The articles studying only cervical spondylodiscitis demonstrated higher risk of neurologic symptoms (52%, 37 of 71 cases) and a higher frequency of epidural abscess formation (72%, 36 of 50 cases) in comparison to the non-cervical involvement.

Among 3236 spondylodiscitis cases, 1314 patients had a variety of neurologic manifestation: 415 (32%) presented with subjective symptoms including radicular pain, sciatica or numbness, whereas 899 cases (68%) had a significant neurologic deficit defined as Frankel A,B,C or D.

Although the Frankel A & B, the most severe subtypes of neurologic deficits, constituted a smaller group (22%) of patients, they showed the lowest possibility for complete recovery (16%, p < 0.001) in addition to the highest risk to remain unchanged after treatment (34%).

The majority of Frankel C (N = 333) had partial recovery (53%) whereas 29% had complete recovery. A remarkable number of Frankel D (N = 280) exhibited complete recovery (53%) with almost an equal number of patients had partial (25%) or no recovery (20%). Approximately 34% of patients with neurologic symptoms (n = 449) promptly underwent surgery after confirmation of diagnosis. Whereas, 353 patients (27%) sustained surgical intervention between 1-14 months after diagnosis.

The current study highlights the relatively poor prognosis of neurologic deficits associated with pyogenic spondylodiscitis. Delays in diagnosis and treatment can lead to progressive infection that spreads into the spinal canal resulting in epidural abscess formation [43,44]. The compressive effects of epidural abscesses cause severe pain in addition to myelopathy and radiculopathy [45]. In addition, associated ischemia and infarction of the spinal cord can aggravate the neurological status. Furthermore, vertebral bone destruction and secondary spinal instability potentially exacerbates canal compromise beside neurologic compression [46].

The rate of neurologic compromise has been reported from 7% by Hadjipavlou up to 57% by Curry Jr, et al. At least a simple extremity weakness manifests in 79% of patients with neurologic impairment, according to Butler study [8,16,36,47]. Aneta, et al. reported neurological symptoms in 1/3 of the cases and ranged from radicular pain to radicu lopathy (29%) to paresis (2-13%) and cauda equina syndrome. (10%) [48]. Current systematic review demonstrated radicular pain and absence of motor deficit in 32% of patients with neurologic findings. However, significant motor deficits occurred in 68% of patients consisted of 22% Frankel A & B, 25% Frankel C and 21% Frankel D.

The relatively high percentage of Frankel A & B case that were paraplegic or had a cauda equina syndrome might be attributed to the age, delayed diagnosis, epidural abscess formation, multi-level involvement, or cord level involvement. The roles of these factors in development of neurologic impairment were assessed:

1) Age: In the past decades, the most frequently affected people were elderly patients who more often experience multiple co-morbidities and are subject to drug-resistant organisms, particularly MRSA [45]. However, the current study demonstrated a drift of neurologic symptoms to the younger ages (range: 43-70 years, median: 60.3 years), that is high likely attributed to the increased number of IV drug user patients

2) Delayed diagnosis: The delayed diagnosis of spondylodiscitis, reported between 1 and 6 months, has significant impact on the natural history and the neurological outcome This systematic review confirmed the high possibility of delayed diagnosis in the spondylodiscitis patients with neurologic deficit, roughly 56.2 days (from 10 to 120 days). The diffuse and non-specific back pain, commonly absence of constitutional symptoms, inconclusive or late responding lab tests, late appearance of radiographic features, and general tendency to attribute the back pain to the degenerative changes particularly in older patients, all lead to delayed diagnosis. Delayed treatment often facilitates the "break out" of the infection into the adjacent tissues planes including the epidural space, the psoas muscles, paraaortic/retroperitoneally in the abdomen, retropharyngeally in the neck, and paravertebral and retroplural in the chest along with the development of sepsis. The infection spreads from the disc space into any available space which explains the frequency of epidural abscess formation in the patients with spondylodiscitis. Another important consequence of the delay in diagnosis of spondylodiscitis is the progresson of bony destruction that leads to progressive destruction of the endplates, the trabecular bone of the vertebra and progressive collapse and segmental kyphosis leading to instability [47,48].

Conventional treatment of spondylodiscitis is consisted of administration of appropriate antibiotics for 6-12 weeks and surgical intervention in the circumstances with failure of conservative treatment [43,47,50]. However, great diligence must be maintained during conservative treatment since rapid progression of bony destruction, instability, segmental kyphosis, and a neurologica deficient will demand abandoning antibiotic therapy alone and require surgical debridement. Neurologic compromise has led to several authors suggesting different treatments. Yoshimoto, et al. evaluated the result of conservative treatment in paralysed patients who were not able to undergo surgery due to poor general condition. He discovered that paralysis improved in 73% of these patients with nonoperative treatment [40]. Cheung, et al. believe that only 10-20% of patients suffering from pyogenic spondylitis require open surgery. He also expressed that surgical decompression can improve the prognosis for neurological recovery much better than non-operative management [51]. Graeff, et al. pointed out that epidural abscess, multilevel osteomyelitis, or diabetes escalate the risk of conservative treatment failure [52] McHenry MC, concluded that in the patients with neurologic compromise, the outcome of surgery was favorable in nearly 70%; even better results was achieved in the absence of diagnostic delay [21]. Zarghooni, et.al reported persisted motor deficit in 30% and hypaesthesia in 90% after surgical intervention but the quality of life and patients' satisfaction was higher in the surgical treated group of patients. Lerner, et al. identified an improvement of neurological deficits for 76% after surgery while 20% showed no change [53]. Hadjipavlou, et al. demonstrated that only 23% of patients with paralysis on admission recovered completely after surgical decompression [16].

In contrast to the previous authors, we compared the frequency and outcome of different Frankel's grades. Approximately 27% of conservatively treated deficits experienced failure of treatment and underwent surgical approach from 1 to 14 months after diagnosis. Furthermore, 34% of patients with neurologic symptoms required prompt surgery because of severe (Frankel A or B) or progressive neurologic impairment. 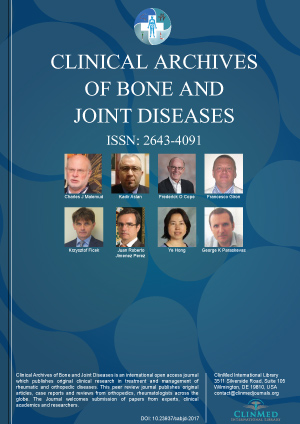 © 2021 Nabizadeh N, et al. This is an open-access article distributed under the terms of the Creative Commons Attribution License, which permits unrestricted use, distribution, and reproduction in any medium, provided the original author and source are credited.