Background: It has long been suspected that oral diseases could have an effect on pregnancy outcomes in different countries.

Objective: This study described the dental caries incidence among pregnant women and examined its relationships to their oral health and behavior.

Patients and methods: Two hundred pregnant women were invited to participate in this study. Their ages ranged between 18-40 years. They were inspected at Maternal and Child Hospital as well as the College of Dentistry during the period from January to October 2021. Maternal variables were identified as medical history, previous pregnancy, dental history, presence of any dental complaints during pregnancy and oral hygiene practice. Screening for mothers' dental caries was carried out using the decayed, missing and filled Teeth index.

Conclusions: Women in this study had a high prevalence of dental diseases and knew little about dental care during pregnancy. These results will be helpful in planning oral health programs for pregnant women.

Dental caries is a local structure destruction of the tooth due to acidity produced by the bacteria during the dietary carbohydrate fermentation [1]. Streptococcus mutans is the primary etiological agent of human dental caries [2]. Dental caries is one of the major oral health problems. The World Health Organization reported that approximately 2.4 billion individuals worldwide have dental caries [3].

Women are more susceptible to dental caries and have high incidence during pregnancy [4-6]. This observation could be due to the special conditions pregnant mothers suffer, such as increased acidity in the oral cavity, reduction in saliva production, sugary diet, fast food, inadequate attention to oral health and delayed treatment [7,8]. If left untreated, dental caries may proceed to inflammatory complications [9], which could influence pregnancy outcomes. Several studies have reported a positive association between dental caries and adverse pregnancy outcomes, including preterm birth, low birth weight and preeclampsia [10-12]. In contrary, others showed no association between oral health and pregnancy outcomes [13,14].

This is a cross-sectional study which was carried out by a dental health professional team on pregnant women in their 2nd and 3rd trimesters and attending Maternal and Child Hospital and the College of Dentistry in Basrah during the period from January to October 2021. The work has been approved by the Ethical Committee of the Dentistry College in Basrah. Two hundred pregnant women were invited to participate in this study. Their ages ranged between 18-40 years.

Maternal variables were identified and included age, medical history, previous pregnancy, dental history, presence of any dental complaints during pregnancy and oral hygiene practice. A preterm infant was defined as one with a gestational age less than 37 weeks. Mothers who had hypertension and diabetes or any chronic diseases were excluded. Also, mothers who delivered twins were excluded.

The oral health measures to be investigated in this study were decayed, missing, and filled teeth index and its components, periodontitis and gingivitis.

Among 200 women who delivered during the study period, 28 (14%) women had dental caries. Among them 16 (6%) women were treated for dental caries. The basic socio-demographic characteristics of the participants according to the presence or absence of dental caries were illustrated in Table 1.

Women with dental caries tended to be at age (33-40 years) in comparison to other age groups. In this study, women believed that their dental problems might affect their general health.

Moreover, many women think that can lose a tooth just because she is pregnant. In addition, mothers who did not brush their teeth believed that they could lose a tooth with dental caries only because they were pregnant (66.7%) in comparison to regular twice a day brushing (6.8%) (Table 2). A group of women were visited dentists regularly either before or during their last pregnancy had less frequently dental caries (Table 2). Similarly, mothers who brushed their teeth and used dental floss and mouthwash had less frequently dental caries.

Oral health indicators of the mothers and their association with preterm birth are shown in Table 3. Significantly, higher dental caries (17.9%) were associated with preterm birth. The frequency of toothache and oral ulceration during pregnancy had no significant relationship to preterm birth (Table 3).

However, many women in this study had dental caries and continued their pregnancy without treatment, which is in agreement consistent with other studies [17,18]. Despite the increased risk of dental caries during pregnancy, they do not seem to take a routine check up and treatment. Pregnant women are physically less active, eat more, eat sweets every day, and prefer fast food than usual weight in adult non pregnant women [19]. Otherwise, the dental caries and its treatment were not associated with other adverse pregnancy outcomes, such as preterm birth or preeclampsia [13,14]. Therefore, my recommendation is if a woman is planning a pregnancy or is pregnant, regular check up and treatment for dental caries are needed without fear of dental treatment. It is important for adults to go to the dentist, even when they do not have problems with their teeth. These findings may motivate women for a good level of oral hygiene to prevent disease and enhance their own oral health as well as that of their infants.

Moreover, it has been reported that dental visits and services were less frequent in patients with dental caries. Several studies have reported the association of periodontal diseases with preterm birth and preeclampsia [20-22]. This is in agreement with recent studies, demonstrating that maternal periodontal disease is an independent risk factor for preterm birth in Jordan, Saudi Arabia and many other countries [17,23-25], whereas others did not find such an association [26-28].

In this study, dental caries was more significant in mothers who brushed their teeth less frequently or did not use dental floss and had fewer dental checkups before and during pregnancy. This shows the importance of oral health awareness for oral hygiene by pregnant women.

Smoking was not a detectable risk factor, unlike the findings of a previous study conducted in Adelaide, Australia, where 16.4% of preterm birth could be attributed to smoking [29]. This may be due to the small l number of smoking mothers in Iraq. It is also recorded that women who gave birth to more children show a higher incidence of dental caries compared to women with only one child [30]. Toothache and oral ulceration in this study were not associated with preterm birth.

In conclusion, I recommend a national policy to support dental examination and awareness of good dental hygiene practices for pregnant women. These results will be helpful to establish program for a better oral health pre and during pregnancy.

I would like to express my thanks to Dr. Maysoon Sharief, Department of Gynecology and Obstetrics, Maternal and Child Hospital, Basrah for her help in sampling. 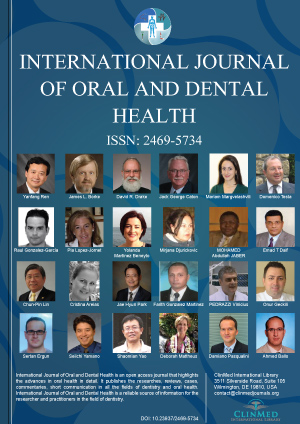 © 2022 Kadhim HN. This is an open-access article distributed under the terms of the Creative Commons Attribution License, which permits unrestricted use, distribution, and reproduction in any medium, provided the original author and source are credited.