Few studies have directly examined the health care costs of those who suffer from mental disorders. The quality of administrative data has improved to the point where such study is currently possible.

Aims of the study

Prevalence and cost results for 16 years of physician billing data comparing the health costs of groups with and without substance and/or other psychiatric disorders are described.

A 16-year dataset containing 95846511 physician-assigned International Classification of Disease (ICD) diagnoses and billing costs (54% female) for 768460 unique individuals (64% female) was employed to develop three groups: Group 1 - Those without psychiatric disorders; Group 2 - Those without substance disorders but having other psychiatric diagnoses; Group 3 - Those with substance disorders. Associated ambulatory and inpatient/emergency admissions were also examined for each group. Total diagnoses, and costs per group, and descriptive statistics for unique individuals within groups were summarized.

Having a substance disorder has a substantial impact on health-related expenditures. Taking into account substance disorder morbidity is central to planning treatment in respect to how mental disorder resources are constructed and rationed within the health care system.

Other studies employing this dataset have begun to examine the clinical pathways in time illustrating the emergence of mental disorders and related physical diagnoses. These results have immediate relevance for general medical practice. Consideration of the temporal relationship of substance disorders together with mental disorders in association with biomedical disorders as a standard of care is central to a sustainable health system.

Substance abuse and dependence are of paramount concern to society. Legal and illegal substance consumption are avoidable risk factors related to disease burden. The significant costs associated with alcohol abuse and dependence alone account for more than 1% of the gross national product in high-income and middle-income countries with a major proportion adding into health costs [1]. Alcohol also accounts for a major portion of mortality in some countries. For instance, alcohol-attributable mortality was a cause of more than half of all Russian deaths at ages 15-54 years [2]. Nevertheless, in relation to the level of the disease burden, alcohol-related research represents only one-sixth of that thought to be warranted [3].

Current societal patterns of alcohol use impose a huge health and economic burden on modern society [4,5], hence understanding the health and economic burden of substance disorders is important in respect to organizing services [6-8]. Primary and secondary service providers are a focus for capacity building and improvement of access to services [9,10]. In order to consider the cost-effectiveness of evidence-based interventions designed to reduce the burden of substance-related disease, comparative analysis is required [7], yet, comparative practice-related cost analysis is impeded by the considerable methodological heterogeneity in the published literature [6]. While the results of demographically-focused studies are useful in respect to the measured demographics [8], the results are not always generalizable in terms of utility to sector or system-wide policy formation [6]. Additionally, most studies restrict their research focus to dual diagnoses or comorbid mental and substance disorders or substance disorder specifically [7].

Further, national surveys are not consistently replicated and often fail to parse analysis of costs into unique categories that take into account complex morbidity [7]. Few, if any studies take into account the biomedical and biophysical disorders associated with mental or substance disorders, or both. The Adverse Childhood Experience study is one body of work that places biomedical and biophysical disorders at the centre of consideration related to substance disorder [11-15].

Analysis at the population-level is emerging as a viable approach that offers the potential to address sector and system-wide policy and practice issues related to substance disorders. Economic analysis forms a basis for policymakers to improve healthcare [16,17]. Further, the population-based study of multi-morbidity has provided insight to the fundamental relationship between mental disorders and associated biomedical and biophysical disorders [17-24].

Aims of the Study

This paper describes the 16-year biomedical and biophysical billing costs and associated ambulatory and inpatient/emergency admissions for those with or without substance disorders or other psychiatric disorders, or both, employing a case-comparison design.

Data for this paper was collected under ethics ID-REB15-1057. All physicians in Alberta must directly bill the provincial health plan for each patient visit for payment. Data analyzed for each billing record included an encrypted unique patient identifier, an International Classification of Diseases (ICD-9) diagnosis, a visit cost, age, and sex. The physician billing data and patient-associated ambulatory and inpatient admissions were comprised of records for all health services rendered to individuals from the Calgary Health Zone in Alberta Canada who sought health care for a specified problem on a specified date and subsequently were assigned an ICD diagnosis for the period of spring 1993 to fall 2010. More details on the data source, population, and provincial mental disorder prevalence rates for are available [23,24].

Table 5 presents a summary of where the frequency of diagnoses associated with Group 3 (both substance and mental disorder diagnoses) exceeded the sample size.

Table 1 and Table 2 show the total diagnostic frequency, unique number of individuals and the descriptive statistics, mean, and standard deviation for each sex.

For both sexes (Table 1 and Table 2) mental disorder linked diagnoses make up the majority of the total number of diagnoses. The mean diagnoses for each individual is greatest for those with both substance and mental disorders. The mean values are greater for females in all groups.

Table 3 summarizes for males and females the total and mean cost per individual (Calculated from Table 1 and Table 2).

Similarly for ambulatory and inpatient admissions for both males and females, and higher for females in Table 4, the mean visits for all disorders per individual for those with both substance and mental disorder was greatest, followed by those with only mental disorder. Both groups were more than twice greater than the group without substance or mental disorder.

The results were consistent with the higher levels of physical disorder and morbidity associated with the report of adverse childhood experiences and early alcohol use [25,26]. In the present study psychiatric diagnosis is a proxy representing one endpoint of life stress and early adversity. Furthermore, psychiatric diagnosis in adulthood is often viewed as a sequelae of adversity in childhood [27]. Moreover, substance abuse and dependence are often a natural consequence of adversity, such as maltreatment [28].

The implications for policy are straightforward. Organizations delivering specialized services to treat substance disorder and psychiatric disorders would benefit by integrating with the delivery of health services given the exceptional amount of funding directed towards treating the somatic complaints of these two groups. Education is required for medical and allied professionals alike regarding mental disorder and addictions assessment as this is related to assessment of health status and in order to increase the capacity to identify and treat both mental disorder and substance problems together with their associated morbidities.

There are several limitations of this study. First, mental disorder diagnoses may be less accurate for the community mental disorder comparison sample (those with a mental disorder who did not receive any tertiary care), as these diagnoses were made by physicians who have less specialized psychiatric training. Second, there was no adjustment for the severity of medical illness when comparing the health care utilization and cost among the three groups. This remains an issue to address in future study in terms of the associations between disease severity, co-morbidity, and cost. Third, the observational data used in this study do not permit identification of a causal relationship between mental disorder and health care utilization and cost. This requires examination in age and time dependent cohorts of the emergence of mental disorder and substance disorders in relation to health problems and biomedical diseases. Fourth, data only include those individuals with billing data and it did not include those who did not seek any mental or physical health care; such individuals may be deceased, may have moved or may be healthy. As a result, the association between mental disorder and health care utilization could be slightly overestimated.

The cost of substance disorder and its biomedical morbidity outweighs that of mental disorder. Further, the biomedical morbidity results indicate that an integrated medical and mental health approach to the treatment of both substance and mental disorders and their morbidities is required at the most fundamental levels of health service organization. 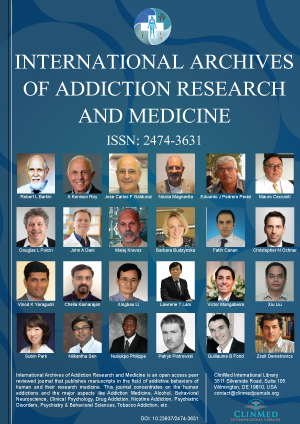 © 2022 Cawthorpe D. This is an open-access article distributed under the terms of the Creative Commons Attribution License, which permits unrestricted use, distribution, and reproduction in any medium, provided the original author and source are credited.