Examine the difference in alcohol consumption among adolescents in urban and rural areas of Coahuila, Mexico.

Quantitative research, with descriptive-correlational, prolective and cross-sectional scope. The sample was comprised by 274 adolescents from two residence areas (urban area = 141; rural area = 133); the convenience sampling was used. The AUDIT questionnaire was used to measure alcohol consumption. Ethical and legal aspects were considered.

The mean age was 13-years-old; most of the adolescents lived in a nuclear family and had not drank alcoholic beverages. A difference between the residence areas and the amount and frequency of alcohol consumption was found. Consumption was greater in urban areas.

Differences in alcohol consumption were found between adolescents in the two residence areas.

Alcohol consumption is a social phenomenon that affects the general population, regardless of gender, cultural level, or age. In addition, excessive consumption of alcoholic drinks is a public health problem around the world, which puts physical, social, and emotional development at risk [1], since it is a risk factor for mental and behavioral disorders, as well as chronic diseases such as systemic arterial hypertension, diabetes mellitus, liver cirrhosis, and cancer, among others [2].

Adolescents are in a stage of self-awareness and adaptation to the environment that make them vulnerable [2]. Adolescence is characterized by the desire to experience new sensations and risks; therefore, it is the most vulnerable part of the population for alcohol consumption, since they perceive alcohol use as a way of adapting to society. Social factors include the search for company in parties or gatherings, where coexistence among friends is used as a justification to have alcoholic drinks [2,3].

Previous studies state that it is possible that the consumption of alcoholic drinks negatively affects the neurodevelopment [4]. Additionally, adolescent alcohol use is associated with increase in social anxiety and reduction in cognitive, social, and emotional processing [5]. Similarly, adolescent alcohol consumption and risky drinking is related to future problems related to alcohol use.

The World Health Organization (WHO) states that 3.3 million people die each year from this addiction, being the psychoactive substance most used by adolescents. The use and abuse of alcohol causes more than 200 diseases and disorders, therefore, it is considered that 5.1% of the global burden of disease and injuries is attributable to alcohol use [6].

Likewise, Mexico ranks third in alcohol use in the American continent, with a percentage of 86% of the total population. Thus, it is considered that the consumption of this substance affects 70% of adolescents [2]. It has been reported that in 2016, 39.8% of adolescents aged 12 to 17 years have drank alcoholic beverages sometime in their life. Moreover, it was found that excessive drinking has increased over the years (8.6% in 2016); similarly, alcoholic drinking has increased in women [7].

In rural areas of Mexico, where about 23% of the population lives, it has been documented that the percentage of alcohol dependence is higher than in urban areas (9.3% in urban areas; 10.5% in rural areas). It has been reported that the population in rural areas does not identify this problem as a health problem, due to the acceptance of the habit by society. Therefore, it is hardly presented as a claim for medical consultation before any comorbidity or serious social consequence appears [8].

During adolescence, the link with alcohol use begins and it is during this time where problems related to alcohol drinking such as school dropout, low grades, accidents, health damage, mainly due to excessive drinking or to the combination of alcohol and drug use. International studies show that adolescents living in rural areas have a higher risk of alcohol use than those who live in urban areas [3].

Given the increase in alcohol use by adolescents, both male and female, it is considered important to make contributions to address the problem, either through prevention, treatment, or rehabilitation [9]. For these reasons, it was decided to examine the difference in alcohol consumption in adolescents in urban and rural areas of Coahuila, Mexico.

This was a research with a quantitative approach and with descriptive-correlational, prolective, and cross-sectional scope [10]. The study was performed with the participation of 274 middle school adolescents from two residence areas (141 from urban areas and 133 from rural areas). Convenience sampling was used. All middle school students were included and adolescents without their informed consent or the informed consent of their parents were excluded.

A sociodemographic data questionnaire was used for data collection, with information on age, gender (male and female), and type of family (nuclear, single parent, living with another family, other). Subsequently, the AUDIT questionnaire was applied to determine alcohol use, with a score ranging from 0 to a maximum of 40 points. The classification of the type of use is obtained by adding the items, and the cut-off points that are from 1 to 3 are considered proper drinking, from 4 to 7 are considered alcohol dependence, and from 8 to 40 are considered harmful drinking; a Cronbach's Alpha of 0.84 to 0.90 was obtained [11,12].

After the approval of the ethics committee of the institution was obtained, a meeting was held in the different institutions to explain to the parents of the adolescents the objectives, risks and benefits of the research, and to obtain the signature of their informed consent. Then, the consent of the participants was requested and the sociodemographic data card was used, followed by the AUDIT instrument. At the end, the participants were acknowledged.

Data analysis was performed with the SPSS V 25 program, using descriptive statistics such as frequencies, percentages, mean, median, and standard deviation. For inferential statistics, the Kolmogorov Smirnov test (p < 0.05) was used, which determined a non-normal distribution, so the Mann Whitney U test and tests of association using the chi-square test were used to measure the difference in means.

This study adhered to the provisions of the Helsinki's Declaration, the General Health Act on Health Research in the Second Title on the ethical aspects of human research, respecting the dignity and protection of their rights and welfare, protection of privacy and informed consent [13].

The sample consisted of 274 adolescents. 133 residents were from the urban area and 141 residents from the rural area. The mean age in both residence areas was 13-years-old (SD = 0.483), ranging from 12 to 14 years of age. Most of the adolescents were male in the urban area and female in the rural area. Also, most of the adolescents lived in a nuclear-type family in both areas. Table 1 shows the characteristics by group.

Regarding alcohol consumption, it was obtained that 40.1% of the adolescents had drank alcoholic drinks at least once a month, of which 56.4% were adolescents from the urban area and 24.8% from the rural area. When analyzing the difference in means, the difference between the residence area and the total amount of alcohol consumption was obtained with the Mann-Whitney U test, finding a significant difference between areas (U = 6031.5, p = 0.000). Also, the chi-square test (χ2 = 0.079) showed an association between the residence areas and the categories of alcohol consumption (sensible, risky, and harmful). For both areas, a reasonable consumption was found for the most part (Table 2).

No association was found between the residence area and the typical amount of alcoholic drink, frequency of drinking, loss of control over drinking, increased drinking relevance, morning drinking, feelings of guilt after drinking, memory lapses, drinking-related injuries, or related to the concern of other with respect to drinking (χ2 > 0.05). Association was found between alcohol consumption and family type between the residence areas (χ2 > 0.05; Table 3). When investigating alcohol consumption by sex, associations were found for both areas between male and female (χ2 > 0.05; Table 4).

Alcohol consumption in adolescents is a current health problem. The onset of consumption is increasingly at a younger age; researches such as that conducted by Gardea, López, Alonso, Castillo & Alonso [14] and Telumbre, et al. [6] indicate an age of onset of consumption of 12 years. Similarly, in this research the mean age was 13 with a minimum of 12 and a maximum of 14 years of age. In terms of gender, the female sex stood out in the rural area while in the urban area the male sex stood out and in the type of family in both middle schools the nuclear family type stood out.

In this research, an alcohol consumption of 40.1% was observed in both areas, a figure lower than the national average of alcohol consumption of 71% [6]. However, higher consumption was seen in the urban area than in the rural area, contrary to what was found by Obradors-Rial, et al. [3], which indicated higher risky drinking in the rural area (59.65%), where the main risk factor was the family environment. In this research, no differences were found with respect to family environment between the residence areas, since in both areas most adolescents live in nuclear families.

Newborty-Birch, et al. [15] mentioned that teenagers under 15 years of age should not drink alcoholic beverages and advised that alcohol consumption should be avoided in adolescents between 15 and 17 years of age, but if they drink, it is recommended not to drink more than three to four units per week, because all underage consumption is considered risky. This study found that most of the adolescents in both areas had not drunk alcohol. However, in the urban area, higher than recommended consumption (more than 4 times a week) was found in 15% of the participants.

In addition, Villatoro-Velázquez, et al. [7] found that in Mexico the alcohol consumption is higher in men (41.7%) than in women (37.9%). Similarly, Tegoma-Ruiz & Cortaza-Ramírez [16] showed lower hazardous drinking in women (76.8%) compared to men (82.7%). This research found mostly reasonable drinking in both genders; however, in the urban area a similar risky consumption was found for men and women and a higher harmful consumption in the female sex, contrary to what was observed in the research carried out by Villatoro-Velázquez, et al. and Tegoma-Ruiz & Cortaza-Ramírez [7,16].

Alcohol consumption is a multifactorial problem influenced by factors such as family, society, and friends. This was a cross-sectional descriptive-correlational study with the objective of examining the difference in alcohol consumption of adolescents in urban and rural areas of Coahuila, Mexico. The sample consisted of 274 adolescents, 141 from the rural area and 133 from the urban area; convenience sampling was used.

The authors stated there were no conflicts of interest.

The authors stated there was equal contribution. 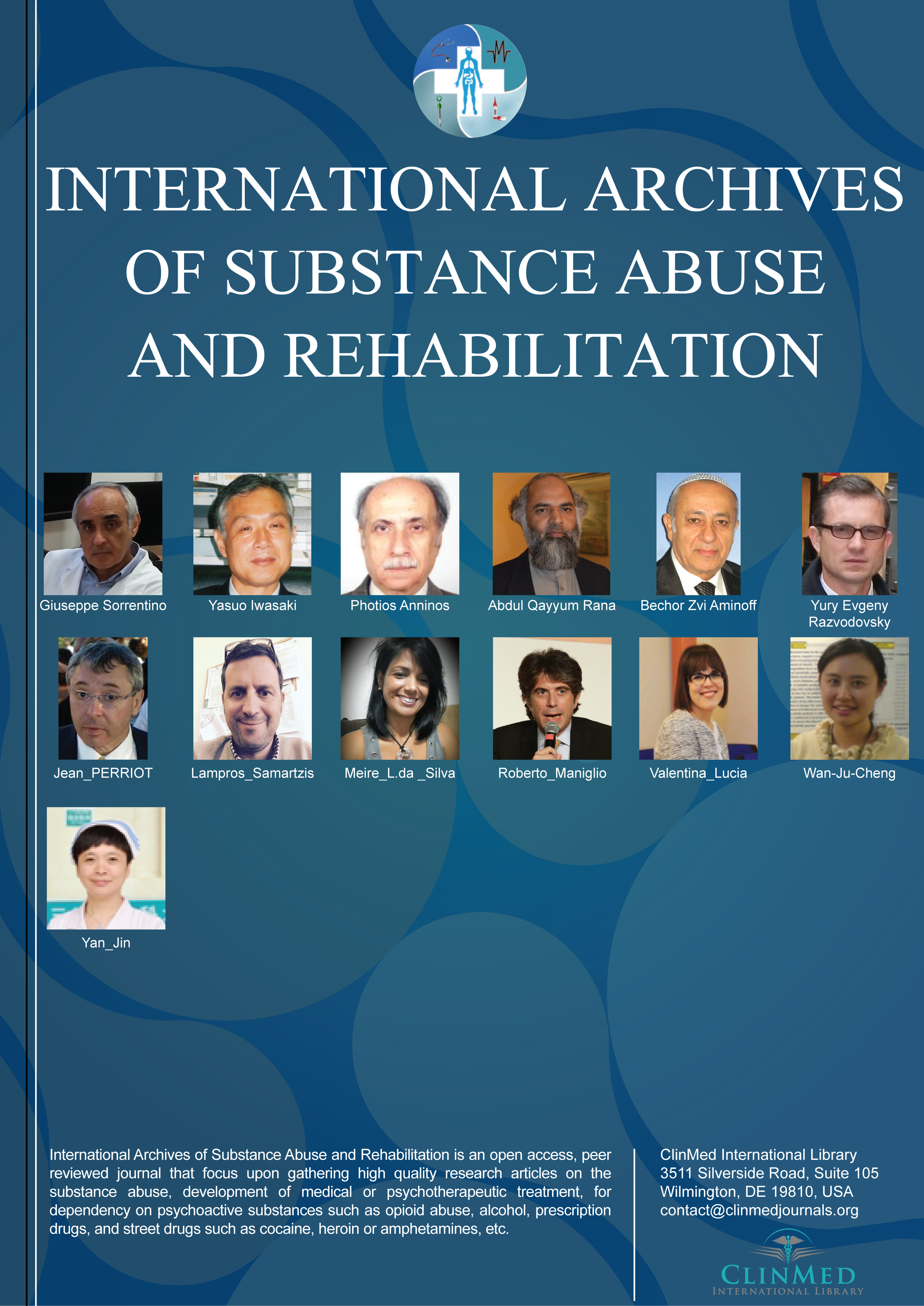 © 2021 Gutierrez ERH, et al. This is an open-access article distributed under the terms of the Creative Commons Attribution License, which permits unrestricted use, distribution, and reproduction in any medium, provided the original author and source are credited.