Allergic rhinitis (AR) is an inflammatory disease mediated by immunoglobulin E (IgE) following exposure of the nasal mucosa to an allergen. Glycophosphopeptical (GFP) is a molecule composed of polysaccharides of fungal origin and proteins of vegetal origin, adsorbed in an inorganic phosphate-sulfate-calcium matrix, stimulates the innate immunity, during infectious processes.

The objective of the study was to analyze the clinical response of specific immunotherapy (SIT) and the use of GFP in patients with allergic rhinitis.

An observational, retrospective, comparative and analytical study was carried out, with non-probabilistic sampling of consecutive cases. We reviewed records of patients diagnosed with allergic rhinitis treated at least 6 months with GFP and SIT. Descriptive statistics, Student's t and Wilcoxon's test were used for comparation.

GFP added to SIT does not produce superior clinical improvement in patients with allergic rhinitis compared to SIT alone.

Allergic rhinitis is a symptomatic disorder of the nose, caused by inflammation mediated by immunoglobulin E after exposure of the nasal mucosa to an allergen [1]. Symptoms include rhinorrhea, nasal obstruction, nasal pruritus and sneezing, significantly altering the quality of life of patients. AR is associated with comorbidities such as asthma, sinusitis, otitis media, nasal polyposis, lower respiratory tract infection and maxillofacial alterations. According to ARIA (Allergic Rhinitis and its Impact on Asthma) it is divided into mild (does not interfere with activities of daily life or sleep) or moderate-severe (interferes with sleep, exercise, work and school activities), intermittent (less than 4 days a week or less than 4 weeks) or persistent (more than 4 days a week or more than 4 weeks), these categories can be combined [2-6]. Allergen-specific immunotherapy, which should be maintained for 3-5 years, after a positive test with specific allergens using one of the available techniques (intradermal, patch or prick).

Glycophosphopeptical (GFP) is a molecule composed of polysaccharides of fungal origin and proteins of vegetable origin, adsorbed in an inorganic phosphate-sulfate-calcium matrix. It has been shown to stimulate innate immunity, mainly during infectious processes [7-10] as an adjuvant to specific immunotherapy accelerates the conversion of the Th response to the Th2 phenotype, [11-15] by stimulation to innate immunity (dendritic cells) via recognition of this molecule by non-specific receptors. The objective of the study was to analyze the clinical response, allergen SIT and the use of GFP immunomodulatory in patients with allergic rhinitis.

We realized an observational, retrospective, comparative and analytical study, with database of patients diagnosed with allergic rhinitis registered in the Clinical Immunology and allergy service of the National Medical Center “20 de Noviembre”, ISSSTE, México in treatment with specific immunotherapy. The patients were older than 4-years-old and under 70-years-old, both genders. Patients with immunosuppressive treatment and cancer were excluded. Thirty patients with a diagnosis of allergic rhinitis treated with Allergen-Specific Immunotherapy and Glycophosphopeptical and 30 patients with Specific Immunotherapy only, between 2008 and 2010 were included. They should have been treated for at least 6 months before admission. Non-probabilistic sampling of consecutive cases was carried out. The diagnosis was based on a clinical course and positive skin test for common allergens by intradermal reaction. The clinical response was evaluated by identifying the number of infections, severity and frequency of symptoms before the start of treatment and 6 months after the start of treatment in both groups. Statistical analysis of the results was performed by descriptive methods (means, ranges, percentages), as well as comparison tests, for the comparations between group using numerical variables, Stundet's T test was used; supported by IBM SPSS software for Windows, version 21 (IBM Corp).

Sixty patients were included in the study, with an average age of 31 years (range 4-58 years), with 22 (37%) men and 38 (63%) women. Stratifying the total group in group 1 with SIT, with 9 men (30%) and 21 women (70%), group 2 SIT + GFP the mean age was 36 years (range 4-68 years) with 13 men (43%) and 17 women (57%). Before the start of treatment, it was found that 50% of total patients had allergic rhinitis with mild intermittent and mild persistent severity of 43%. Only two patients (3%) had moderate-severe intermittent and two others moderate-severe persistent. In the SIT group before the start of treatment, 14 patients (47%) had intermittent mild grade, 14 mild persistent (47%) and only one patient (3%) was classified in each group of moderate-severe intermittent and moderate-severe persistent. In the group SIT + GFP we found 16 (53%) patients with mild intermittent, 12 (41%) mild persistent and one patient (3%) in each of the moderate-severe types (Table 1). Using tests of related means we observed globally (with both treatments) and separately that the two groups presented clinical improvement: In terms of the number of infections (in a period of 6 months) (Figure 1 and Figure 2) and improvement of symptoms (when going to a lower degree of severity according to ARIA) (Figure 3 and Figure 4). Comparing the groups (STI vs. STI + GFP) the number of infections after treatment, there was no statistically significant difference (P = 0.061). Regarding symptoms, there was improvement for all patients. However, when comparing the results between groups, no statistically significant difference was reported for the group with SIT (P = 0.536) and SIT + GFP (P = 0.619).

Figure 1: Number of infections for patient before and after treatment with SIT + GFP. (P = 0.061 for related means). View Figure 1

Figure 2: Number of infections for patient before and after treatment with SIT. (P = 0.061 for related means). View Figure 2

Figure 3: Severity of symptoms in ARIA classification (initial and after 6 months in treatment with SIT + GFP) (P = 0.619 for comparation between groups). View Figure 3

Figure 4: Severity of symptoms in ARIA classification (initial and after 6 months in treatment with SIT) (P = 0.536 for comparation between groups). View Figure 4

The usefulness of SIT for allergic rhinitis has been demonstrated and is currently part of the primary treatment for improving the quality of life of patients with this condition, it is the only therapeutic measure that modifies the natural history of the disease [16,17]. Immunological mechanisms are fully described and with proven effectiveness adapting to the future vision of personalized medicine [18].

The use of GFP as other immunostimulants of natural origin, has been recommended in different pathologies, together with the treatment of choice, the use as a whole has shown improvement in the clinical course of the disease as shown by studies in diabetic foot and serous otitis media [19-21], that disease is strongly related to allergic rhinitis [22].

At the time of this study, there are no studies performed on allergic pathologies. This seems to be the first study that analyzes the probable benefit of administering GFP together with SIT to improve the clinical course of rhinitis. The immunostimulatory mechanisms of glycophosphopeptical as the increase in the maturation of dendritic cells was initially described, however there are additional mechanisms of action that could support the treatment of specific immunostimulation as peripheral mononuclear cells differentiation [24], which are related to the secretion of IL-12 and IL-4 after stimulation with lipopolysaccharide in asthmatic children [25]. The use of GFP as part of the treatment of asthma is registered and is mentioned in the documents of the European Patent Office [26].

The use of GFP has been evaluated in patients with exacerbations of chronic bronchitis used together with antibiotic treatment, showing a significant reduction in the total number of exacerbations, in our study the number of infections decreased in both groups (with SIT and SIT + GFP), not showing statistical significance [27]. It is necessary to continue studying this group of patients and provide long-term follow-up to assess whether there is an additional benefit in the GFP group.

This would make us conclude that the glycophosphopeptical does not produce superior clinical improvement compared to SIT alone, however we must take into account the limitations of the study that can significantly affect the results. The number of patients was small, these were included when meeting the criteria issued, notwithstanding that not all were treated at the same time. Finally, the symptom severity scale was used according to the ARIA consensus, replacing the results of standardized quality of life questionnaires, which is the appropriate measure to assess the clinical response in this pathology.

Despite all the above and not being able to verify whether glycophosphopeptical added to specific immunotherapy produces superior clinical improvement in patients with allergic rhinitis compared with those with immunotherapy alone, we consider that its usefulness lies in laying the background for future work that may have a greater quantity and quality of information to analyze the possible benefit of GFP. We insist that empirical observation and previous studies merit further studies to rule out or support this therapy.

All authors declare no conflict of interests.

All author declare equal contribution to this article. 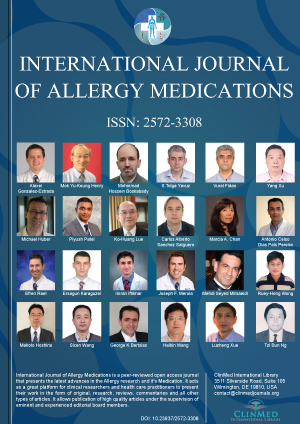 © 2018 Becerril-Bautista B, et al. This is an open-access article distributed under the terms of the Creative Commons Attribution License, which permits unrestricted use, distribution, and reproduction in any medium, provided the original author and source are credited.