The change in cell size and alterations in the distribution of cells at different phases of the cell cycle are indicators of change in cell homeostasis. In this study, the HEp-2 cell line cells were treated for 24 hours by two shapes of Gold nanoparticles (GNPs): Gold nanospheres (GNSs) and Gold nanorods (GNRs). The cytotoxic effect of GNPs was evaluated by different methods. The MTT assay revealed that GNPs have a cytotoxic effect on HEp-2 cells and the GNRs are more toxic than GNSs. Image morphometric analysis showed a decrease in the mean values of Nuclear Area Factor (NAF) of HEp-2 cells treated with GNPs when compared to control cells. We found that cell size decreased in cells treated with GNPs and most of the cells were in S-phase and decreased at G2-phase of the cell cycle when compared to control cells. Also, it was noted that in cells treated with GNSs the apoptotic features increased with increasing concentration from pre IC50 to post IC50, contrary to cells treated with GNRs the apoptotic features decreased with increasing concentration from IC50 to post IC50. Cell size and cell cycle distribution changed after treatment by GNPs. The GNRs may be more toxic than GNSs.

Cell size is an important parameter in histopathology as the change in size may indicate cancer and/or cell damage (as atrophy, hypertrophy and disturbed cell membrane). Increasing the amount of DNA is associated with an increase in cell size [1]. The cell cycle is divided into four phases: G1, S, G2 and M consequently. A phase does not start unless the previous one is complete [2]. To maintain the cell size or decrease the dispersion of size, the cell cycle progresses with the attainment of a critical size [3]. To achieve this goal, G-phase allows cells to form mass before physical division to prevent them become smaller with every division [1]. All phases of the cell cycle are present in cell cultures, simultaneously undergoing progression and cell division [4]. However, in malignancy, there is an acceleration of the cell cycle due to alterations in the genome [5]. During cell death, the size of cells is changed. For example, the apoptosis is characterized by cell shrinkage, nuclear fragmentation, nuclear shrinkage, irregular nuclear outline and chromatin condensation [6]. On the other hand, the necrosis is associated with increases in cell size, eosinophilic cytoplasm and patchy chromatin. Also, cell swelling occurs in secondary necrosis [7]. The uptake and internalization of nanoparticles to cell during cell cycle depend on several factors such as: The phase of cell cycle [8-10], the degree of closeness between cells [11], and cell density [4]. According to Kim, et al. G2/M > S > G0/G1 is the ranking of the uptake of nanoparticles during cell cycle after 24 hours [4].

The effect of GNPs varies according to several factors such as shape [14], size [15], the concentration of particles [16], duration of treatment [17] and type of cell studied [18]. Regarding the shape, they classified GNPs as spherical and non-spherical particles [19]. In the current study, we investigate the effect of two different shapes of GNPs on cell size and cell cycle distribution of HEp-2 cell line.

Head and Neck Squamous Cell Carcinoma (HNSCC) HEp-2 cell line was obtained from Cell Culture Department (VACSERA-EGYPT). Cultured cells were divided into two groups: the first group was the control untreated cells, and the second group was HEp-2 cells treated with GNPs. The second group was further divided into GNSs treated HEp-2 cells and GNRs treated HEp-2 cells. GNPs were synthesized based on the chemical reduction of the Gold (Au3+) aqueous solution with citrate ions [20]. In case of GNRs, a seed-mediated approach by using silver seeds was followed [21]. Size & Shape: TEM were performed on JEOL JEM-2100 high-resolution transmission electron microscope at an accelerating voltage of 200 Kv (Figure 1).

MTT assay utilizes yellow tetrazolium salt (3-[4,5-dimethylthiazol-2-yl]-2,5-diphenyltetrazolium bromide) which is water-soluble salt and is reduced to an insoluble purple MTT-formazan complex by cleavage of the tetrazolium ring by Lactate Dehydrogenase (LDH) within the mitochondria. This reduction takes place only when mitochondrial reductase enzymes are active, thus the conversion can be directly related to the number of viable (living) cells. The MTT viability test measures the cell proliferation rate and conversely, when metabolic events leading to apoptosis or necrosis, there is a reduction in cell viability. The resulting intracellular purple formazan crystals can be solubilized and quantified by spectrophotometric means [22]. Different concentrations of GNSs and GNRs are showing in (Table 1).

Hematoxylin and Eosin Staining was applied after slide preparation by following steps:

• The slides were immersed in filtered hematoxylin stain for 3 min and then washed with distilled water twice.

• The slides were immersed in filtered eosin stain for 5 seconds and then washed with distilled water.

• Dried slides were immersed in xylene, mounted with Canada balsam then coverslips were placed and left to dry.

Ten microscopic fields of each slide were photomicrographed at the power of 400X. This was done using a digital camera mounted on a light microscope (Leica, DM 2700). Then, images were transferred to the computer system for analysis. Field selection was based on the presence of the highest number of apoptotic cells. The photomicrographs were evaluated for the presence of morphological criteria of apoptosis.

The photomicrographed fields were analyzed using image analysis software (Image J, 1.27z, NIH, USA). Images were automatically corrected for brightness and contrast. Corrected images were converted into 8-bit grayscale type. Phase color coding of the desired area was done automatically. The color threshold was adjusted to select the nuclei of HEp-2 cells. To standardize the method for all analyzed images, efforts were made to minimize the operator guided in favor of the automatic thresholding throughout this step. The surface area and circularity of the nuclei were automatically measured. Nuclear area factor was calculated using the following formula [23].

The data were then tabulated in Microsoft Excel sheet (Microsoft Office 2010®).

Metals nanostructures have unique electrical, optical and thermal properties because of their higher surface-to-volume ratio, electron plasmon resonance, and quantum confinement effects [22]. Currently, GNPs have been studied for medical applications as therapeutic and drug delivery agents. The researchers tried to review promising applications of GNPs in chemotherapy of cancer highlighting in-vitro efficacy studies in the recent studies [24]. In the current study, the MTT assay revealed three main information: Firstly, the GNPs had cytotoxic effects when compared to control cells. Secondly, the GNRs are more cytotoxic on HEp-2 cells than GNSs. Finally, the viability percentages of cells are decreased by increasing the concentrations of GNRs and GNSs (Figure 2). The curve of toxic concentration range for GNRs was found to be widely below the ones observed for GNSs. This can be explained by: 1- Cetyl Trimethylammonium Bromide (CTAB) molecules form a bilayer on the surface of the GNRs and it also gives a toxic character to GNRs [25,26], 2- the GNRs have rough surface when compared with the GNSs, and this play a role in internalization to the cell [27]. The TEM images showed that the GNSs have around the shape and a smooth surface whereas the GNRs have four tips or angles at the surface, 3- the viability test also revealed that the GNRs induce early inhibition than GNSs. The reason of this is the responsibility of roughness in cell membrane disruptions. The damage to the plasma membrane is due to the decreasing lipid bilayer stability [17] and 4- The cationic surface charge of GNRs makes them more toxic than the anionic charge of GNSs. The GNRs gain a positive charge from the cationic surfactant CTAB [24] and the GNSs have a negative charge due to the citrate anions.

In the present study, the changes in cell size during cell cycle were evaluated by forward scattering histograms of flow cytometry assay [29,30]. The FSC histograms revealed that there was the reduction in cell size increased by increasing concentrations of GNSs (Figure 5 and Figure 6). These results were confirmed by cytological examination and image morphometric analysis which revealed that there was an increase of apoptotic features by increasing concentrations of GNSs.

Data obtained from flow cytometry results also denoted that there was an increasing percentage of cells at S-phase followed by a decrease at G2-phase in cells treated by GNPs when compared to control cells after 24 hours (Table 2). This reduction in percentages of cells can be explained by the effect of GNPs on cells as the GNPs induced DNA damages [31] by their effects on mitochondria or/and by facilitating the formation of reactive oxygen species. Thus, GNPs might suppress the DNA synthesis at S-phase.

Table 2: The effect of different shapes and concentrations of GNPs on cell cycle distributions of HEp-2 cells. View Table 2

In the current study, the cell cycle distribution of GNRs treated HEp-2 cell line indicated that the amount of apoptosis is more than that in GNSs after 24 hours which means that the DNA damage is more evident than in GNRs. Thus, different shapes of GNPs have different cytotoxicity levels on Hep-2 cells. The GNRs are probably more toxic than GNSs.

This work was supported by STDF (5505, 2015), Minia University and Assiut University. 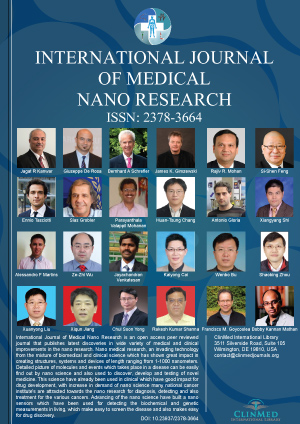 © 2019 Sholqamy MI, et al. This is an open-access article distributed under the terms of the Creative Commons Attribution License, which permits unrestricted use, distribution, and reproduction in any medium, provided the original author and source are credited.