© 2019 Wei F, et al. This is an open-access article distributed under the terms of the Creative Commons Attribution License, which permits unrestricted use, distribution, and reproduction in any medium, provided the original author and source are credited.

How Sexual Behaviors are Influenced by Personal Cognition and Control Toward Sex? Let Chinese University Students Tell You

In addition to sexual desire and knowledge, sexual morality, desire control, and attitude toward sex might contribute to the premarital sexual behaviors in young people, but were less studied. In 886 Chinese university students of Study 1, we have developed a Sexual Awareness and Coping Strategy Inventory (SACSI) with four domains of Personal release, Sexual knowledge, Traditional sexual morality and Negative attitude, which displayed satisfactory convergent and discriminant validities. In Study 2, we have invited 25 female students with (FS) and 50 without (FN), 50 male with (MS) and 97 without (MN) premarital sexual experience, to answer the SACSI, the sociodemographic and sexual risk behavior-related questions. Male students scored higher on Personal release, Sexual knowledge, and Negative attitude, but lower on Traditional sexual morality than female did. The FS group scored higher on Personal release, but lower on Negative attitude than FN did. The Negative attitude in MS and FS were correlated with the premarital sexual behaviors. Our studies have depicted more factors crucial for the premarital sexual behaviors, and recall for more education on the desire control and attitude toward sex in university students. 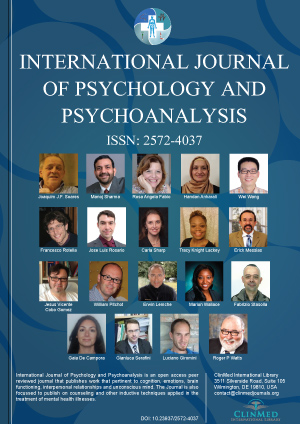 International Journal of Psychology and Psychoanalysis