Functional gastrointestinal disorders are pathologies of multifactorial origin. A shorter duration of breastfeeding has been found to enhance the prevalence of irritable bowel syndrome (IBS) in adulthood. The present observational study aims mainly to evaluate if breastfeeding is associated with IBS only or with other functional gastrointestinal disorders (FGIDs).

Our results support the presence of an association between breastfeeding and non-diarrheic functional bowel disorders (IBS, IBS with constipation, mixed IBS, functional constipation and bloating) in FGIDs patients, but it also demonstrates that these people are less acutely anxious.

Many patients have persistent and recurring GI symptoms attributed to the digestive system. The Rome criteria [1], a classification of the functional gastrointestinal disorders (FGIDs) has been proposed, for FGIDS not associated to any structural or biochemical abnormalities. These disorders can affect any part of the GI tract (esophagus, stomach, colon, terminal intestine). FGIDs are not psychiatric disorders, although stress and psychological difficulties can make FGIDs worse. There are three primary features of FGIDs, namely motility, sensation and brain-gut dysfunction.

The prevalence of FGIDs in the general population is high: Functional dyspepsia 20 to 30%, Irritable Bowel Syndrome (IBS) 10 to 20%, functional constipation up to 27%, pelvic floor dysfunction 5 to 11% [2]. More than half of subjects with FGID symptoms do not consult a physician, and take over-the-counter medications. These subjects also report significantly more job absenteeism and disability than healthy people [3]. Thus the high prevalence of a relatively benign problem is costly [4], those afflicted report power quality of life [5] and the search of a basic reason to these common dysfunctions remains very much in order [6,7].

It has long been known that breastfed children are more resistant to infections (gastroenteritis, ear infections, etc.) than others [8]. This effect is linked to several immunological and non-immunological mechanisms. Secretory immunoglobulin (IgA, IgG and IgM), absent from the intestinal cells of newborn infants [9,10], intact immune cells (B and T lymphocytes, macrophages, leucocytes) as well as immunity-stimulating factors [11,12] and non-immunological factors [13] can be found in the mother's milk. Recent studies have shown that nutrition has a major impact on early microbiota composition until cessation of breast-feeding, and is necessary for their maturation into adult-like microbiota [14].

A recent study concluded that early environmental factors may play a role in the subsequent genesis of IBS [15]. The authors investigated 767 Australian subjects, and searched for the presence or not of IBS excluding organic diseases simply on the basis of self-reported rather than clinical investigation. They found that development of IBS was associated with childhood factors namely a shorter duration of breastfeeding, sharing a bedroom, exposure to herbivore pets and hygiene factors. Overall, they were extremely careful in their conclusion, wishing to rule out a type I error. They also investigated patients with functional dyspepsia, but they found no association with breastfeeding.

The aim of the present study was to evaluate if breastfeeding is associated with mood disorders and specific functional gastrointestinal disorders.

From January 1, 2011 to December 31, 2014, 1205 outpatients were consecutively referred by gastroenterologists to our Center for Functional GI and Motility Disorders (CEFRED) (Centre d'Exploration Fonctionnelle et de Rééducation Digestive, Gastroenterology Clinic of the Avicenne Hospital), a tertiary center for FGID management. Among them, only 99 (9%) were unable to specify whether or not they were breastfed, and excluded for this reason. The 1106 remaining patients with a full data set are included in the present study.

Before inclusion, a full evaluation had failed to yield any organic cause for the patients' complaint, although they were screened for bacterial overgrowth, eosinophilic colitis and connective tissue disorders. They also had morphological evaluation (endoscopy or radiology). Metabolic, endocrinologic, neurologic and psychiatric etiologies were excluded. Patients with drug addictions or previous digestive surgery, except cholecystectomy and appendectomy, were causes of exclusion from the study. A single investigator (MB) confirmed independently, during the medical visit, the validity of the initial diagnosis of FGID, and of all data mentioned above.

The comparison of the groups of FGID patients was performed within the framework of an observational study.

Finally, a question about breastfeeding ("Were you breastfed?" Answer "Yes" or "No"; not otherwise specified) was asked to all patients. This question has been asked all along because of the long known debate among pediatricians on a possible relationship between breastfeeding and constipation in babies [24,25].

Psychometric evaluation was focused on anxiety and depression. The level of depression was assessed by the French validated translation of the Beck Depression Inventory (BDI II) [26], frequently used in the evaluation of depression in gastrointestinal pathologies [19,27].

Anxiety was assessed by the French validated translation of the State and Trait Anxiety Inventory (STAI), made up of two axes (A1 for state anxiety and A2 for trait anxiety) [28]. This test was selected for its simplicity, validity and reliability [29] and also because it was used to evaluate anxiety levels and to distinguish ‘‘state'' anxiety from ‘‘trait'' anxiety in gastrointestinal diseases [30,31].

The patients who were breastfed were fewer than those who were not (41% vs. 59%; p < 0.001), but younger (P = 0.039). The BMI and the proportion of female patients are not different in breastfed and non-breastfed patients.

The present study demonstrates that patients who were breastfed are less anxious, but also have increased odds of presenting specific functional bowel disorders with delayed transit: IBS with constipation, mixed IBS, and functional constipation as well as bloating, while pathologies with shorter transit, i.e. diarrhea, IBS with diarrhea, upper FGIDs (esophageal, gastro-duodenal) and anorectal disorders are not associated to breastfeeding.

Breastfeeding does not protect against diarrhea, and favors delayed transit: Odds of constipation and odds of IBS with constipation are 1.9 fold increased. Yet, Bristol stool form was not different between breastfed and non-breastfed patients. Pediatricians often incriminate breastfeeding in the genesis of constipation in babies [24]. In tis study, the increased odds of bloating (3.5) could be interpreted as a result of the delayed transit. Indeed, previous studies have shown the importance of methanol production in constipated subjects [32-34]. In the present study, the methane production was not evaluated and further studies are needed to evaluate. In contrast, many studies on the importance of the microbiota on FGIDs tend to enhance the importance of environmental factors [35-38].

Recent data have shown that childhood environment factors, particularly bedroom sharing and pet exposure are a risk factor for IBS in later life [15]. These authors also found that a shorter duration of breastfeeding was significantly associated with IBS as an adult, but they failed to identify the subtypes of IBS, such as defined by the Rome III group, thus lumping together patients with constipation and those with diarrhea, although these are clearly different psychologically [19,39] and in terms of pathophysiology. Moreover, they also failed to recognize the fact that patients may evolve from functional constipation to IBS with constipation or vice-versa [40]. It is possible that behind these reasonably objective considerations on the importance, role and impact of breastfeeding, in terms of future digestive function, as part of modality of expression, there are much more basic different attitudes toward real or not difference between the old fashioned "biomedical" model of health and disease, and the more contemporaneous "biopsychosocial" model of medicine [41]. In short, that is the key question in all these studies including the present one.

Taking into account all possible variables including caring and maternal attitude [42], different elements may be at work during breast feeding, namely type of delivery, quality and type of maternal milk [43], its impact on the intestinal flora of the newborn baby [44], immunity as well as duration of breastfeeding [15], and use of antibiotics, etc. One must also consider all variables at work only after birth in view of mother-child attachment. Simply said, at the beginning of life, babies only have their body to speak out, and visceral somatization conceivably could be part of the process.

There are several methodological limits to the present study even if it confirms with a much larger group of patients, the study which demonstrated that environmental factors may play a role in the future occurrence –or genesis-of FGIDs [15], indeed, it does not take into account duration of breastfeeding, and changes in maturation of the baby's intestine over the first months of life. A second limit is the impossibility to assess the validity of a past history of breast feeding in adult patients. This limit was the same in previous published studies [15]. This objection could have been lifted by mother's interviews. Another limit is the absence of a healthy control group in the present study. However, it would be impossible to recruit two control cohorts of babies which are breastfed or not, follow them over decades and evaluate them subsequently for FGIDs, on the basis of the Rome criteria, established only in 2006, and make sure they do not have an underlying organic disease masked clinically as a gut dysfunction. One might also argue to have as basis of study a group of healthy subjects not suffering from FGID, referred according to a rigid algorithm defining the different types of FGID, and eliminating those not scoring positive for the Rome III criteria. Finally the question used didn't take into account the duration of breastfeeding [45], that could interact with the intestinal microbiota [46].

The previous study [15] investigating the potential influence of breastfeeding on future occurrence of FGIDs is entirely speculative when addressing the question of "hygiene hypothesis". We don't have data to support or not such hypothesis.

Breast-fed newborns have been demonstrated to carry a more stable and uniform microbiota population when compared to the formula-fed ones [47]. Breast milk can participate in the bacterial colonization of the breast-fed newborn [48]. The newborn is then continually exposed to new bacteria from the environment, food and skin bacteria from adults via feedings, petting or kisses. Once dietary supplementation begins, microbiota profile of breast-fed infants changes and between the first and the second year of life, differences between breast- and formula-fed infants are lost [49]. In addition, it was shown that breastfed could change the distribution of intestinal cells of Cajal in the small intestine and in the colon of a rodent model [50], and then alter the transit.

Another important aspect of breastfeeding is its psychological consequence for the mother as well as for the newborn. These become less anxious if breastfed. For the mother, postpartum depression is predicted by breastfeeding cessation and associated with shorter breastfeeding duration [51]. On the other hand, providing breast milk symbolizes embodied contact with their baby and increases maternal confidence [52]. All subjective and emotional exchange that may or not may occur between mother and child at that time, including all olfactive and gustative elements experienced by the baby. May carry an impact still visible during adulthood. It is not known if the psychosomatic separation or even dissociation has an impact on bowel function. It may possibly shed some light why a severe deleterious trauma such as sexual abuse, is found more often in the past history of patients with lower gastrointestinal dysfunction rather than in those with upper gastrointestinal dysfunction [53].

This study was performed in a tertiary center where patients consult for management of FGIDs, and are not a part of the general population. 99 patients were unable to indicate whether or not they were breastfed, but the high significance of our results allows to eliminate reasonably this parameter as a key factor. On the other hand, the relatively small number of breastfed patients (41%) is lower than the actual frequency of breastfed subjects (74%) in France [45]. However, the frequency of breastfeeding found in the present study is in agreement with the mean age of the patients.

To conclude, breastfed patients suffered more from IBS-C, IBS-M, FC, and bloating and had lower "state" anxiety. In contrast, breastfeeding was not associated with esophageal, gastro-duodenalorano-rectal disorders. These results must be confirmed by further prospective studies.

No funding for this submission.

The study was conducted in accordance with the Helsinki Declaration and was approved by the local medical ethics reviews board. Written informed consent was obtained from all patients. 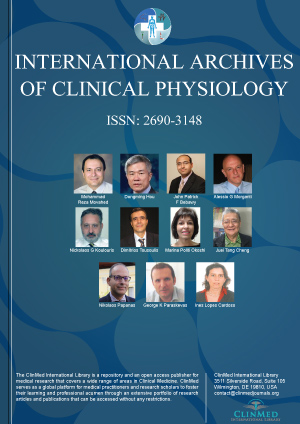 © 2019 Bouchoucha M, et al. This is an open-access article distributed under the terms of the Creative Commons Attribution License, which permits unrestricted use, distribution, and reproduction in any medium, provided the original author and source are credited.