Individuals suffering from Major Depressive Disorder (MDD) and those who are vulnerable to depression show biases in attention, memory, and interpretation [1]. These individuals are likely to focus attention on and also tend to remember mood-congruent information. They are also likely to interpret uncertain scenarios in a negative manner. On the whole, these biases are known to affect their ability to interpret an emotional situation predominantly in a negative manner, which later develops into an experience of negative affect [2]. Much of these early interpretations are spontaneous, rapid and involuntary. Hence they may not easily end themselves to alteration by emotion-regulation processes. Once this process of negative affect has started, depressed persons also exhibit elaborate processing of negative material. This is a consequence of inability to parsimoniously disengage from and inhibit the negative processing [3]. Cognitive control is the ability to allocate attention to specific stimuli in the situation and to unfasten from these cues when required, it is a fundamental requirement for adaptive self-regulation [4]. These difficulties in inhibition may lead to prolonged activation of negative material in working memory (WM) which could lead to the use of maladaptive emotion-regulation strategies such as rumination. Failure to regulate the processing of negative information may also come in the way of effective use of healthier strategies such as reappraisal and focus on planning [5].

These control deficits neurobiologically have been linked to imbalance in the prefrontal-limbic networks in depression [6]. Recent innovative treatment options for depression have emerged from different models of the etiology of depressive illness. These include repeated transcranial magnetic stimulation (rTMS) in the dorsal part of the prefrontal cortex [7], and deep brain stimulation (DBS) [8]. Developments in animal tests have also looked at the prefrontal - limbic network and decreased prefrontal activity post induced stress. The swim test involves placing the rodent in a container of water from which the subject is unable to escape. After attempting to escape for sometimes the subject adopts a posture of immobility. This dysregulation of the neurocircuitry involves alterations in amygdala and decreased in all medial prefrontal cortex (mPFC) sub-regions in chronic stress scenarios. These methods have evolved from findings in cognitive neuroscience findings that the neural circuits sub serving mood and emotion seem to operate abnormally in depression [9,10]. Though these methods have provided interesting insights into treatment of MDD. However, they have also been criticised on certain grounds [11].

Another option that has been researched in the last decade is cognitive remediation. Cognitive remediation typically involves training in mental processes and tasks. In MDD, Cognitive Control Training (CCT) has been explored as a novel treatment option. CCT involves training the mental processes associated with cognitive control, namely- working memory, response inhibition and mental flexibility through computer-based tasks. The targeted mechanism of CCT is increase in amygdala activity and decrease in prefrontal through regulation of emotions [12]. In other forms of therapy, the increase in prefrontal is implied. However, it holds a special place in cognitive control training where it is specifically targeted. It works on the assumption that reduced Executive Control is related to difficulty in emotional regulation [13]. The training tasks in CCT programs range from basic attention training tasks (Dot probe task, Flanker Task) to relatively more demanding tasks such as inhibition and problem solving [14]. However, generalizability still remains in question as the tasks are 'cold' tasks cut off from an emotional context. This invalidates the premise of depression that the prefrontal dysfunction is more prominent when there is an emotionally stressful context. Only a few studies have addressed this concern and attempted to train the 'hot' networks as well [15]. Effective cognitive retraining can harness 'bottom up' or 'feed forward' process- perception, pre-attentive perceptual biasing and 'top down' or 'feedback' process, i.e., attentional cognitive control [16].

Neurocognitive tasks rely on feed forward and feedback operations and these processes may not be as distinct as once thought. The synergistic interactions between these maybe specially critical in understanding and remediating impaired brains. If the cognitive domains are appropriately targeted and are specific to neural system functions involved in the mental illness, the result should be generalizable. These gains should eventually translate to better community function and better recreational and social life for the patients [17].

Use of Mood Induction in Cognitive Control Training

Although sparse, attempts have been made to incorporate emotional material to cognitive tasks in order to recruit the 'hot' networks in cognitive retraining for depression, such as Emotional Brain Storming Task in SCIT with Schizophrenia [18], Emotional N-Back task [15], Affective shift task [13]. However these tasks do not directly evoke an emotional corollary or have emotional material as a cue, which may not necessarily conjure the involvement of the limbic regions.

In such a scenario mood induction techniques maybe a useful tool to successfully engage the 'hot' networks during the tasks in lab likes settings of the clinic. It has been shown that both positive and negative mood states elicit activities in the Amygdala-Hippocampal area and Anterior Cingulate Cortex and the Precuneus [19]. There is a debate regarding whether specific neuroanatomical emotional areas can be discerned through conventional methods [20] and the same can be said about neural correlates of mood states [21]. However, hyperactive subgenual ACC (sgACC) has been implicated in depression and has also shown to be activated in studies of sad mood states [22]. It has been shown, for example, that induced moods recruit the same neural substrates [23] and have comparable impacts upon cognition [24,25] and psychophysiology [24,26] as the mood states in mood disorders. There is also an established link between subjective affective rating and brain activation during emotional regulation [27].

Hence, mood induction procedures can the activate same areas as those that are activated in depression. Subjective ratings of affect and brain activations can be reliable. Further, this supports the usefulness of mood induction with patients before cognitive training tasks to help develop a holistic programme which can mimic emotionally straining situations and compel the patient to utilise the prefrontal brain for the task. The framework of using mood induction can be manipulated to increase or decrease the emotional load by keeping the initial tasks/levels purely cognitive and subsequently adding progressively higher intensity inductions by controlling the induction procedure or content of the induction tool.

With correct application and good psychoeducational prologue, the patients are explained the rationale of using induction in sessions after a general familiarization and relative mastery in tasks. The use of evoking the limbic regions is also to mimic in sessions a typical emotional regulation mechanism, by defocusing and inhibiting the emotional material and focusing on the task at hand (working memory, planning, reasoning). The inhibition or the mental flexibility hence becomes an implicit part of the task. The hierarchical search model of personal event retrieval' [28,29] accounts for over-general autobiographic memory. It focuses on how memory search is affected by three factors in mood disorders: capture and rumination processes, when cues used in retrieval activate ruminative thinking; functional avoidance, when episodic material threatens to cause affective disturbance; and impairment in executive capacity and control that limits an capacity individual's ability to remain focused on retrieval in the face of distraction. Mood induction procedures which work through evoking autobiographical memories can help generate this dysfunctional network which is then reworked through cognitive control training.

Mood induction procedures have been well researched [30] and various methods have been validated across cultures. These can be easily deployed in a clinical setting, and since they rely heavily on autobiographical memories, depressive rumination is also targeted through this approach. This method is cost and time effective, can be used with psychologically less sophisticated patients, individuals with chronic depression who generally present with high cognitive deficits as well as with treatment resistant patients. The approach also has high face validity and generalizability.

Mood induction procedures pose an exciting opportunity in area of cognitive remediation where affect is involved. Specifically, for mood and anxiety disorders where certain emotional (limbic) parts of the brain can be involved in the remediation process through mood induction and then other parts (prefrontal) can be activated through cognitive tasks, in order to regulate those mood states. This can help in improving emotional regulation function and reduces maladaptive processes like rumination. 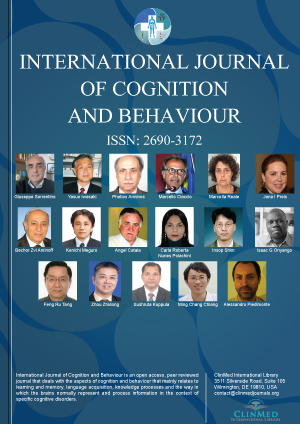 International Journal of Cognition and Behaviour

© 2020 Banerjee M, et al. This is an open-access article distributed under the terms of the Creative Commons Attribution License, which permits unrestricted use, distribution, and reproduction in any medium, provided the original author and source are credited.