Obstructive Sleep Apnea Syndrome (OSAS) is a consequence of a reduced area at the upper respiratory tract that leads to obstruction and cessation of airflow, causing oxygen desaturation and fragmentation of the sleep architecture. Between 60 and 70% of patients with OSAS are obese.

Patients in our study presented an interesting behavior, when compared to reports from some other Countries. Anthropometric indicators were only significant in male patients, and the variables with the highest correlation were NC, BMI and WHI.

Anthropometric indicators are directly related to the severity of the AHI in men only. The relationship between AHI and WHI has been poorly studied in our population, but it showed significant correlation with the severity of sleep breathing disorders.

Obstructive Sleep Apnea Syndrome (OSAS) is a common condition related to the reduction of the upper airway area during sleep, which leads to obstruction and breathing cessation. It is associated to oxygen desaturations and fragmentation of sleep architecture, causing deterioration of mental functions. A number of factors, such as age, gender, smoking, alcohol consumption and obesity increase the risk of developing OSAS upto 10 times [1].

60-70% of OSAS patients are also obese [2] and according to some authors, > 50% of them have a BMI > 40 [3]. Anatomical distribution of fat is different in both genders, given that it tends to be around the waist and in the neck in men and around the hips in women [4]. There is a predominance of central obesity in male patients, and this may explain the difference in OSAS prevalence among both genders [5].

According to data of the Economical Development and Cooperation Organization (OCDE), Mexico has the first place in obesity among its member nations, with 32.8% of it population being obese. Obesity per se represents a burden for the national health system, as well as a decrease in the economically active life of the population related to a higher risk of early death [6]. The National Survey for Health and Nutrition 2012 (ENSANUT 2012) showed that 42.5% of the male subjets were overweight, and 24.2% were actually obese. In the female population, 37.4% were overweight and 34.5% obese [7].

Obesity should be considered as a systemic, chronic, progresive and multifactorial condition, and it is clearly associated to an excessive accumulation of body fat. There are some anthropometric parameters that may help to its diagnosis and classification [8], such as the Body Mass Index (BMI), which measures the nutritional state by calculating the weight divided by the height squared [9].

Waist Circumference (WC) should be measured in the middle point between the ribs edge and the iliac crest at the end of exhalation [10]. WC ≥ 94 cm in men and ≥ 80 cm in women should be diagnosed as carriers of abdominal obesity, with an increased risk of cardiovascular and metabolic complications [11].

Waist-Height Index (WHI) has shown high correlation with the percentage of body fat, and it is a good predictor for risk factors of metabolic syndrome and abdominal obesity. A limit value of 0.5 indicates a higher risk in most of the ethnic populations [12-15].

To calculate Hip-Waist Index (HWI) we have to measure the maximum circumference of the waist and the hip, the latter being taken at the level of the greater trochanter of both femurs, both measures in centimeters and subsequently dividing the waist by the hip. According to the World Health Organization (WHO), central obesity are the patients with rates higher than 0.85 in women and than 0.90 in men [16].

The importance of diagnosing OSAS lies in its association with an increased risk of cardiovascular conditions. Pathogenesis of these cardiovascular complications of OSAS is still poorly understood and several mechanisms seem to be involved, including sympathetic hyperactivity, selective activation of inflammatory molecular pathways, endothelial dysfunction, abnormalities in coagulation, metabolic dysregulation, Insulin resistance and lipid metabolism disorders [19,20].

A longitudinal, prospective, observational and analytical study is reported. It was performed at the Mexican Institute of Integral Sleep Medicine (IMMIS), according to the ethic and research requirements for the use of data at medical files.

Anthropometric measures were taken to patients with clinical diagnosis of OSAS before a Polysomnography (PSG) was performed. Only patients older than 18-years-old were included. The anthropometric parameters obtained were: Weight, height, waist, neck and hip circumference. BMI, HWI and WHI were calculated.

PSG study was performed in order to achieve the AHI. Interpretation of PSG was based on the American Academy of Sleep Medicine (AASM) manual (2012). The diagnosis of OSAS was determined when AHI was higher than 5.

Statistical analysis was performed using the SPSS 21 statistical software (IBM, Armonk, New York, USA). We performed a Kolmogorov-Smirnov test for a single sample and Student's t test, in order to compare the variables with normal distribution between men and women. Pearson Correlation Coefficient was calculated to analyze the correlation between the different variables and the AHI between men and women.

Table 1: Anthropometric differences and severity of OSAS according to gender. View Table 1

Table 2: Correlations between anthropometric measures and AHI according to gender. View Table 2

The main limitation of this study is the relatively small sample given the high prevalence of OSAS in our Country. Another limitation is its design: An observational study has a lower level of evidence, when compared to an experimental one.

In this study, a number of anthropometric measures and their correlation with the AHI were evaluated and compared according the gender as well. Our results show that OSAS severity appears to be higher in men than in women; despite the average age in women was higher than in men.

BMI in our sample presented no statistical differences between genders. Nevertheless, despite having similar BMI, the severity of OSAS showed significant differences when comparing men and women. This fact leads us to think that there may be other anatomical factors having a preponderant role in the pathogenesis of OSAS. The neck circumference seems to be one of these factors and it is associated with a greater severity of OSAS. This may be because the fat accumulation pattern is different in men and women, the neck is one of the main anatomical areas where fat accumulates in men, so NC should always be taken into account as an indirect indicator of AHI severity, but only in male patients [21,22].

The association of OSAS severity and obesity, neck and waist circumference has been proposed in some articles. However this association remains controversial [23-25].

Waist-Height Index is an anthropometric variable that we decided to analyze despite we did not find it in any previous report. We found a significant correlation with AHI (r = 0.62, p = 0.000), but again, this was statistically significant only in men.

Anthropometric parameters are a tool that is not widely used in the assessment of OSAS. Despite the gold standard for diagnosis of sleep disordered breathing (SDB) is polysomnography, the complexity of these respiratory conditions forces us to make a full assessment, including different parameters, not only polysomnographic, but also anatomical and clinical.

The use of these clinical indexes and measures besides being a complement in the global evaluation of patients with OSAS, also represent a screening method to determine in which individuals a polysomnographic study is more imperative. In our study we evaluated different variables according to gender, finding that in men there was a higher correlation rate between anthropometric measures and the severity of OSAS. We did not find in the world literature any other study assessing them in Hispanic population.

We conclude that anthropometric indicators should be taken in mind as a part of the clinical evaluation of patients with SDB, and that those anthropometric measures indicate OSAS severity more accurately in men. Nevertheless, more studies are needed with larger populations.

No funding or interest conflicts are related to this study. 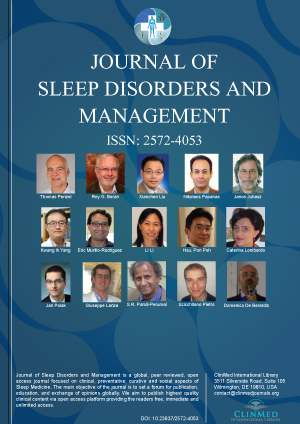 Journal of Sleep Disorders and Management

© 2021 Labra A, et al. This is an open-access article distributed under the terms of the Creative Commons Attribution License, which permits unrestricted use, distribution, and reproduction in any medium, provided the original author and source are credited.