Caring for Meningiomas: A Multi-Disciplinary Approach

This patient was admitted to our department and eventually underwent surgery with gross total resection after pre-operative endovascular embolization of the tumor. The patient underwent a successful recovery and was discharged without major neurological deficits to rehab. On follow up the patient is doing well and is back home with her children. On the day of surgery the patient was intubated and underwent cerebral embolization with occlusion of several tumor-feeding arteries. The patient was th...

Although gunshot injury to the head is usually mortal, survivors frequently show retained metal shrapnel or full bullet intracranially. An important though uncommon complication of retained bullet is that of spontaneous migration. A migrating intracranial bullet is a dilemma to neurosurgeons, as its management is challenging, since the removal of a deep-seated bullet may cause additional neurological deficit. Migration of a retained bullet may cause damage to vital structures and cranial nerves,...

A retrospective case series was performed to evaluate the efficacy of a novel, fully synthetic dura substitute. Clinical outcomes (e.g. infectious, reoperation rates, cerebrospinal fluid leak) and surgeon experiences with the dura substitute intraoperatively were collected. All methods were approved by the Institutional Review Board at Washington University School of Medicine....

The Role of Neurosurgery Mission Trips in Third World Countries

A summary of available data on neurosurgical mission trips has been collected from PubMed and Google Scholar on the following mesh keywords: Neurosurgery trips, mission neurosurgery, and neurosurgery in third world countries. We gathered our information that was closely related to neurosurgical education such as proficiency, equipment, ethics and outcomes....

A case report of psychogenic hemiplegia following a two level anterior cervical discectomies and fusion was contradicted by a thorough electrophysiological findings. To report an unusual case of post-operative hemiplegia in spite of normal electrophysiological and noncompromising radiographic findings. Conversion disorder with sensory or motor system symptoms is a subtype which includes symptoms such as impaired motor balance, paraplegia, muscle weakness, and urinary retention....

Acute or delayed paraplegia or quadriplegia following anterior cervical discectomies and fusion are not common. We report this single case report of delayed quadriplegia following an anterior cervical discectomies and fusion without any change of sensory or motor evoked potentials during the operation. The intraoperative somatosensory (SSEPs) were performed by stimulation of tibial nerves or the median (MN). Motor evoked potentials (TcMEPs) were recorded from intrinsic hand or foot muscles after...

Oxidative stress (OS) could be involved during intracranial aneurysms (ICA) progression but knowledge about comorbidities likely to induce OS is poor. We studied the medical and surgical history of patients with an ICA discovered after a subarachnoidal haemorrhage (SAH) or unruptured (UIA). 175 patients, 58 with a UIA, had been successively recruited from a single centre. Their medical history, comorbidities and treatments had been gathered from hospital files, general practitioners, relatives a...

The authors report a case in which a 38-year-old male who presented himself to the emergency department with a chief complaint of cervical neck pain and paresthesia radiating from the right pectoral region down his distal right arm following self manipulation of the patient's own cervical vertebrae. Initial emergency department imaging via cervical X-ray and magnetic resonance imaging (MRI) without contrast revealed no cervical fractures; however, there was evidence of an acute cervical disc her...

This article reports a left cerebellopontine angle glioblastoma presenting with two week history of rapidly progressive hearing loss and trigeminal pain, treated by subtotal resection and radiotherapy with concomitant and adjuvant temozolomide. At one year, local tumor control and diffuse neoplastic seeding in the cervical spinal cord were evidenced. Glioblastomas involving the cerebellopontine angle are exceptional with only 10 reported cases. The possibility of a glioblastoma should be conside...

As our patient population grows older with improved health care technology and resources, chronic subdural hematoma (CSDH) is an increasingly common disease faced by the modern neurosurgeon. Despite good results with burr-hole irrigation and evacuation - the gold standard treatment for CSDH - recurrence rate remains high. Recent advancements in endovascular management of this diagnosis via embolization of the middle meningeal artery (MMA), either alone or in conjunction with surgical evacuation,...

Delayed Revascularization of Basilar Artery Occlusion due to Symptomatic Progression

The basilar artery is the main arterial contributor to the posterior circulation. Interruptions of this flow can cause devastating strokes and neurological demise. While most patients with a basilar artery occlusion suffer from a high rate or morbidity and/or mortality, a small subset survive but have progressive symptomatic decline. Delayed revascularization of these patients with chronic basilar artery occlusions based on symptomatic progression may provide a favorable risk-benefit ratio, but ... 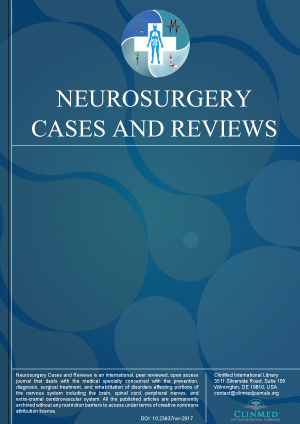