Pulmonary Strongyloidiasis in a Patient with Terminal Pulmonary Syndrome in Manabi Province, Ecuador: A Report Case

Strongyloides stercoralis is a common nematode causing intestinal parasitosis in the Ecuadorian population, but cases of lung infection by this helminth have not been documented in Ecuador. We document the first case of pulmonary strongyloidias is caused by S. stercoralis filariform larvae in a male patient from Manabí Province (Ecuador), showing clinical symptoms of terminal pulmonary syndrome. Previous to the decease of the patient, the larvae were identified by the direct smear method of a f...

The housefly, Musca domestica, is a common household pest known to transmit human diseases like pathogenic bacteria, protozoa, metazoan, fungi and viruses. Apart from they are also responsible for transmitting intestinal parasites, which when outbreaks occur, could wreak havoc on both man and animals. The importance of house fly in disease transmission prompted this study to investigate the presence of intestinal parasites transmitted mechanically by houseflies that infested slaughterhouses in c...

High Prevalence of Epilepsy in Onchocerciasis Endemic Communities of Ngie: Lack of Association with Taeniasis but Strong Indicators of Hereditary Factors and Characteristics of Onchocerciasis Associated Epilepsy Observed

Epilepsy, a neurological condition which affects individuals of all ages has been widely reported to be caused by parasitic, fungal, bacterial or viral infectious diseases of the Central Nervous System (CNS). Taenia solium infection otherwise known as neurocysticercosis in taeniasis endemic zones, Onchocerca volvulus infection in onchocerciasis meso/hyperendemic areas in Africa and other infectious agents have been highly incriminated in different parts of the world. Epilepsy remains an importan...

Cardiovascular involvement by Leptospira is infrequent. However the statistics are under estimated. This paper reports a case of a 39 years old male, who works as a Marine and had traveled to a tropical endemic area for Leptospira in Peru. He was initially admitted with fever, headache and myalgias. He was diagnosed of Leptospirosis (Ig M positive and MAT positive) and malaria and receive specific treatment for both diseases (Doxycycline, Cloroquine, Primaquine). Ten days later he was readmitted...

Dengue Fever (DF) is a serious disease in Indonesia. The sustainability of a DF prevention program remains constrained despite continuing education programs and community participation efforts. Identifying the issues related to the cause of the disease is a major factor in its control. In this study we try to understand the complexity of the management of the disease. We apply an eco-health approach to explore DF management in Bandung city, West Java, an area of high DF incidence. A qualitative ...

Tuberculosis (TB) is one of the major public health threats, competing with the human immunodeficiency virus (HIV) as the cause of death due to infectious diseases worldwide. Extrapulmonary tuberculosis (EPTB) contributes to the burden of disease and does not receive specific attention in international control strategies. We aimed to give an update on the current epidemiological data of EPTB, to describe its clinical spectrum, to identify the main risk factors and to propose effective preventive...

Development of Vaccination against Fungal Disease: A Review Article

Vaccines have been hailed as one of the greatest achievements in the public health during the past century. So far, the development of safe and efficacious vaccines has been a major barrier for other infectious agents including fungi, partly due to of our lack of knowledge about the mechanisms that underpin protective immunity....

Schistosomiasis (Bilharziasis) is water borne parasitic disease caused by a blood fluke (trematode) of the genus Schistosoma. Adult schistosome worms live in mammalian host and the intermediate host is aquatic snail. Schistosomiasis ranks second to malaria in terms of prevalence and persistence with grave public health and socio-economic importance in endemic communities. This study assessed the prevalence of urinary schistosomiasis among students of five selected secondary schools in Ifedore Lo...

Chronic Skin Ulcer due to Mycobacterium Simiae in an Immunocompetent Lady

Skin and soft tissue infections (SSTIs) with Nontuberculous Mycobacteria (NTMs) are increasingly encountered in recent times. We describe a case of a chronic non-healing ulcer on the foot of a young immunocompetent lady caused by Mycobacterium simiae. The diagnostic approach and successful management of the case have been reviewed. This is probably the first case report SSTI due to M. simiae from India....

Uncomplicated Malaria in Children under 6 Months or Less than 5 Kg; How Prescribers in Ghana Manage it in the Absence of a National Policy

Malaria caused by various species of Plasmodium had brought untold socio-economic burden to poor and developing countries of the world. Most malaria associated deaths occur in children below 5 years. The suggestion that antibodies and toxic nature of fetal hemoglobin provide immunity against malaria in children less than 6 months had been disproven. With Ghana having no treatment guideline on the management of uncomplicated malaria in this age group, this study ascertained how Ghanaian prescribe...

Rubella is a contagious disease caused by a virus. Rubella is a major cause of miscarriage or serious birth defects in a developing baby if a woman is infected while she is pregnant. Côte d'Ivoire is a country that is not immunizing against rubella in its Expend program on immunization (EPI).... 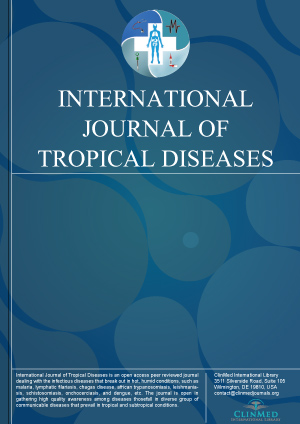